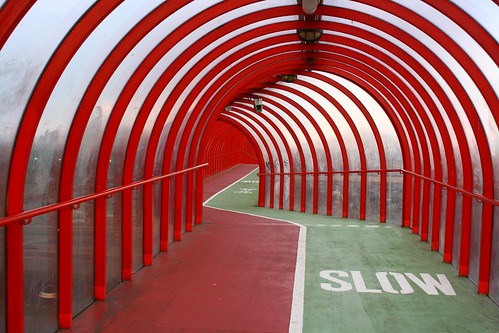 Since we’ve been ‘carless’ for the last eight months, we’ve noticed a few funny things — mainly that buses seem to just hurtle along the road, and cabbies drive like madmen. We wondered if it was all perceptual, since our pace is usually only as quick as a brisk walk, or if most of the people in this city really drive like Jehu.

Common sense would tell us that it’s all perceptual, after all, we’re walking. However, after yesterday, the jury’s still out. 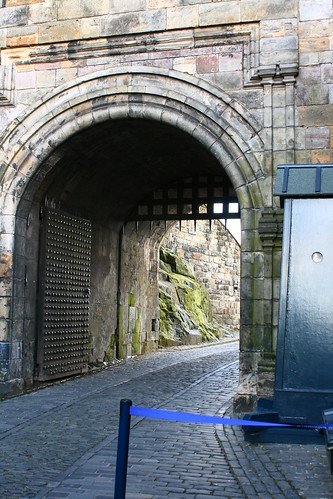 N&K had a tiny glitch in their travel plans in that they forgot to actually look at the itinerary their travel agent had carefully planned out for them, and found that they were, in fact, some eight hours late in picking up their rental car. The company was flexible enough when they remembered, and allowed them to pick it up at night. The only tiny problem is that Glasgow had no automatic transmission vehicles available, and though N. is able to drive a stick (which is called something else here, no doubt), he’s out of practice. N. was, of course, gloriously unworried about the prospect, and Glasgow itself turned out to be not a problem at all. The problem was Edinburgh, and the crazy-busy M8.

N. is a frequent business traveler and worked for a year in London where the right side of the car is the driver’s side and the roads are bafflingly backwards. He airily waved off our questions about roundabouts and traffic circles, and zipped along into traffic, cheerfully ignoring the ‘Excess speed’ bell that the Jetta chimed when he went over seventy-five. D. was in the front seat, snapping photographs and pointing out things to look at, and T., in the seat behind him, began to cringe at the word, “Look–” since it indicated a certain lack of attention to the road on N.’s part.

To his credit, N. got us to our destinations in one piece and with a certain amount of panache. (T. turning shades of green in the back and gripping the seat with her fingernails is hardly worth mentioning.) 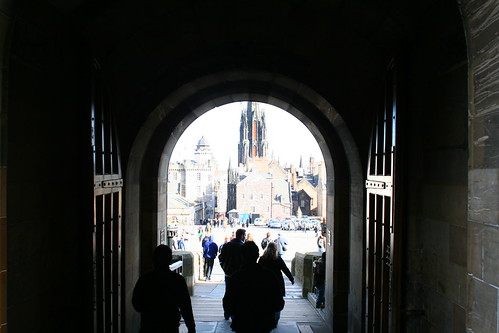 We got lost, of course, and took a few back roads, but eventually found the town of Roslin, and Rosslyn Chapel. There are myriad historical sites in Scotland, and T&D hadn’t even heard of this one, much to N.’s astonishment. Rosslyn Chapel, or the Collegiate Chapel of St Matthew, which is its real name, was founded in 1446 and is the sole surviving medieval chapel which wasn’t destroyed by ardent Protestants during the Reformation. Those are the basic facts. The stranger bits we found out later — the chapel was mentioned in the book The Da Vinci Code and is alleged to be the site of The Holy Grail.

The chapel is, as medieval things often are, encrusted with carvings and statuary and symbolic detail, including a reproduction of the death mask of Robert the Bruce — none of which we can show you because we weren’t allowed to photograph it except from the outside. What was fascinating were the number of people who were there for mystical purposes. D. met a man who was in the sacristy, humming into an open hole which vibrated his voice back to him. He explained that if one did it long enough and at the right pitch, the harmonics would bring into alignment the right and left hemispheres of the brain… (At that point, D. politely nodded and backed away slowly.) Meanwhile, T. was encouraged to go onto the roof by a woman who was enthusiastic about the ‘ley lines’ and magical influences felt directly above the sealed vault in the chapel floor. T&D definitely missed part of the experience by not having read the book, but feel that the other people were at least as entertaining! 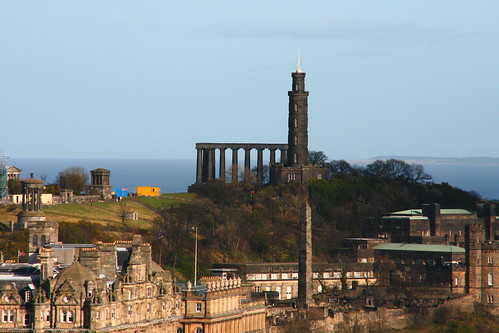 All good things must come to an end, however. We thought we had one more day with N&K in Glasgow, but ran out of time — leaving the University, the Necropolis, the Art School and myriad other Guidebook selections unexplored — alas! Sadly, D. has to attend classes this week — which still strikes all of us as odd, as exams have already been taken!! — and so N&K are off to the highlands for five days alone. More adventures will resume on Sunday, as we head off to Stirling, but until then, we can’t wait to hear about Orkney and the Isle of Skye and other places which are still under a thin layer of snow…

Meanwhile, D.’s getting back to work, and T’s getting on with the grim business of emptying her half of the closet (on the side of the rapidly heating and cooling and poorly insulated outside wall) and bleaching the walls, hangers and affected clothing and shoes (and PURSES)… keeping up with the advancing mold and mildew spores. Eew. It is SO time to pack up and move house! Here’s hoping we won’t make the same mistakes in our next flat!