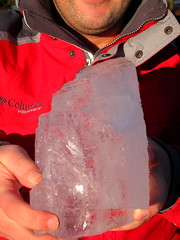 It’s cold, folks. VERY cold (OK, you folk, in the Yukon, yeah, yeah, we know). Shown here is our friend A. holding a hunk of ice. He and D. worked very hard to break a piece free from the layer atop the fountain in Kelvingrove Park: they took a fence-post (somebody else had the same idea, and helpfully left one) and bashed upon the ice until it broke free. This looks to be about 8 inches thick (we must allow for A’s thick fingers – and, yes, the boy is a computer programmer with those sausages). After fishing this piece out of the frozen fountain, A. was wingeing and whimpering about wanting to let it drop, it was so cold. After the photos were taken, he threw it up as high as he could, and … it shattered upon the surface of the ice in the fountain. No cracks in the ice, no damage whatsoever. The edges were probably less frozen than the middle of the ice, so who knows how thick the stuff was? 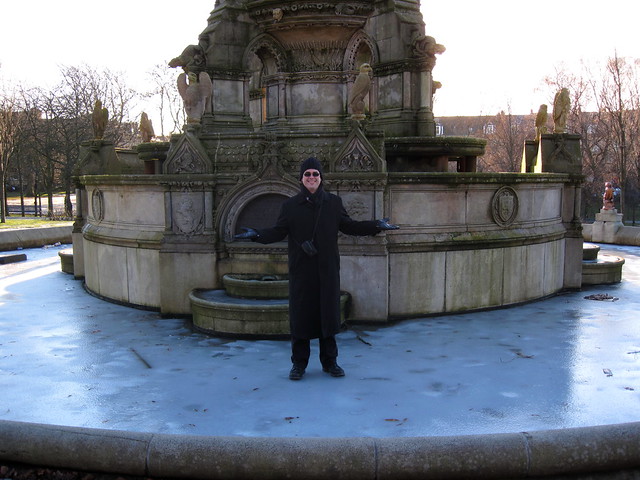 It was thick enough for D. to stand upon the surface, though (A. says that it was more than twice as thick as it needed to be to support D., but … well, D. was still cautious).

It’s cold. And it’s forecast to get colder. We’ve both had our ice-cleats strapped to our boots for weeks, now, and don’t foresee taking them off any time soon. Even when we’re on our Christmas Holiday. Where will we be going? To an undisclosed location. Have a guess, won’t you? Some hints: their native language isn’t English, the travel guides say that you shouldn’t go there if you’re looking for culinary delights, their land-mass is roughly equivalent to the size of the United Kingdom. Any ideas? Do keep on guessing – we’re away from next Wednesday through to the following Monday. We expect to eat quite a bit of flat-bread, and to spend lots of time in hot-tubs.