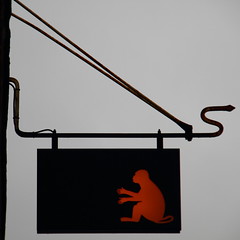 (Admittedly, we only used that title because we had a picture of the new bar up the road to go with it. We also used the title, because it’s sort of a bizarre 50’s phrase, kind of like “a brown study.” Dictionary be darned, no one has yet explained successfully what one of THOSE studies might be. And, incidentally, why a monkey? Why not a sloth?? But we digress. Badly. As if that’s a surprise.)

Greetings from the semi-frigid north. At 37°F/-3°C, with a nippy thirteen mph wind, it’s actually not as cold as it WAS, although the wind is sucking through. The helpful neighbors and workmen unsealed the bathroom window, and it’s entertaining to watch the shower curtain swing in the breeze though all the doors are closed. Brr.

No change on the house front, unfortunately. There’s something in this country called Boiler Insurance. Many people have it. Apparently, many people who have it through a company called EON have less success with getting actual repairs. We are in a wait for the insurance monies to come through. No work will be done until then. Period.

That’s apparently just how it goes.

We’re just kind of …stunned. It’s like a blow to the head, and all of those bluebirds circling before you shake yourself and get up. Everyone is hamstrung by the insurance, and if the homeowner or property manager has the temerity to do repairs themselves? The insurance will not cover it. You cannot return to them with receipts. Things Must Be Done In Order. 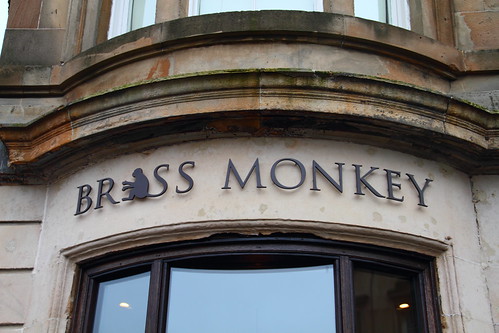 Well, we’re certain you know our opinion on that. And so, we go on with our canning pot of boiling water, while the snow returns this afternoon, and weekend forecasts include a toasty -1°F/-4°C. A bit surreal and bemusing, in the midst of this, Monday, to discover that T’s latest book has won a national honor. Sluicing from a bucket gives her the true feeling of the serious GLAMOR of a writer’s life. It’s sequins and gold lamé, baby, everywhere you look.

So, the boiler issue continues to frustrate beyond bearing. BUT! We have a plan. Of sorts. (We say “of sorts” because the long-term plan is that we may have to move. Again. And that is just to horrifying to even face just now, so we’re putting that discussion off until next week.)

The worst thing is the bathing. Okay, it’s a real pain to crouch around space heaters and wear six layers of clothing and a wool hat, but these things are livable. Fire up the oven and bake cookies for everyone in the building — and voilà– warm house. But there’s really no way to make the pot of boiling water and the dipper take the place of a shower. It’s amazing how quickly one feels dirty (perhaps THAT’S the monkey. Feeling flea-ridden and rank-smelling?) and how soon one’s skin protests. So, we’re going to trundle up the road — literally less than a block — and join the swim club.

We had no idea there was even a swim club nearby. and we’ll have to take pictures of the exterior next week. It’s unbelievably close to our place, and … hidden. The University has a great big pool, and ranks of showers, but we suspended our membership when we went home, and trekking two miles for a shower – with wet hair in freezing weather — wasn’t optimal anyway. The Arlington Baths are hidden in a big old building just the road and around the corner. The Baths are solidly old — like much else here. They opened in 1870, and apparently are the oldest continuously operating swim club in the UK. One has to be sponsored for membership by a member (which makes D’s coworker quite handy), and they still keep to the old-fashioned habit of segregating the occupants by genders some days. Ladies Night at the Baths might be entertaining if one had a raft of friends along and lots to gossip about. Then again, the idea might just features among some of one’s more memorable nightmares.

The Club has claw-footed bathtubs for soaking. A sauna. And a Turkish bath. And many, many showers. Oh, and an Olympic-sized swimming pool. With trapeze rings over it. Click over and watch the video.

(And, apparently for those inclined, it also boasts snooker tables and a pub which specializes in gin drinks instead of smoothies, and a hair dresser. Yeah, it’s an actual “Goodbye, darling, I’ll be at the club,” kind of club. Which is just surreal.) 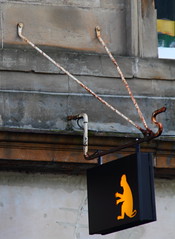 And, most importantly, lovely, hot water, everywhere you look.

The Magic of Google: In doing a desultory search on the whole monkey-on-the-back thing, we ran across the definition of a brass monkey as well — it’s a nautical term. Around the Napoleonic War, the gunships carried multiple heavy cannons, and obviously it was important to properly store the massive cannon balls, which were about 42 lbs/19g each, and shove them down the cannon barrel. So, the sailors came up with a “Monkey” — which, according to the OED was a brass tray — which was used to hold the balls in readiness. In very cold temperatures the brass would contract or even break thus allowing the cannon balls to roll off the Monkey onto the gun deck. Hence the saying about cold. Which we will not repeat at this time.

We have a feeling that this is just one of those etymological folktales, and dearly wish we could find a picture of this monkey thing. Oh, wait. We did!

2 Replies to “The (Shivering) Monkey On Our Backs”