Gotta love the BBC for dragging up the best stories from back in the day… Did you know Glasgow had a vampire back in the 50’s? Okay, yeah, since that dreadful Twilight thing, everybody’s got a vampire these days, but imagine — pre-personal-computer, blue-collar, industrial Glasgow — all gray shadows and gritty blackened sandstone — and the word vampire on everyone’s lips… well, everyone between the ages of four and fourteen, that is.

According to the BBC the police reported about four hundred children, armed with stakes and steak knives, searching the Gorbals Cemetary one afternoon in 1954, for what they said was a seven foot tall vampire with iron teeth. The rumor had started on the playground at a local school, and by closing bell, it was a scene of mass hysteria. The vampire wasn’t just lurking, it had struck, and had taken away two little boys, and eaten them. (This despite the fact that all children were present and accounted for in the vicinity.) 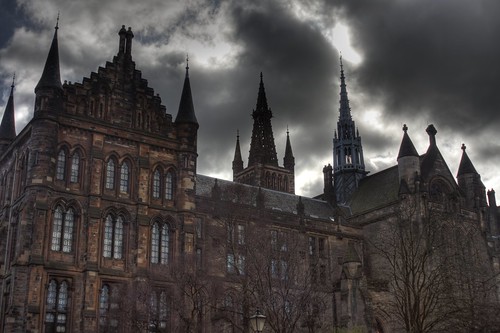 It’s a little like the whole War of the Worlds thing, when in 1938 Orson Welles directed a presentation of the H.G. Wells short story on the radio. People — already jumpy about Hitler striding around spouting warmongering nonsense — panicked upon hearing about a Martian invasion, not realizing the faux news bulletins were part of the Halloween special of their usual radio show. They armed themselves and made ready to repel invaders from outer space… And a few years later, post-War Glaswegian children got ready to… kill something seven feet tall and iron toothed.

Mass hysteria is difficult to control — no one can ever remember who started a rumor, and because it can’t be disproved, it takes time to die down. It’s like the Telephone game — someone whispering something that distorts and morphs into an iron-toothed behemoth. Many a Glasgow parent was, in the end, begging the authorities to either produce the vampire’s lifeless body or some proof that the tale wasn’t true. And as Christians and McCarthyists and Communists all put in their two cents worth (imagine — all this sans the internet!) the whole thing got bigger, and bigger, and bigger…

‘Til someone came up with a suitable cause. It was the Americans. Their fault. Just like they were at the time polluting the world with that rock and roll, they were sending Tales from the Crypt into comic shops overseas, and that was scaring the poor children to death. The solution? Ban the comics, and all would be well. From the BBC: “The government responded to the clamour by introducing the Children and Young Persons (Harmful Publications) Act 1955 which, for the first time, specifically banned the sale of magazines and comics portraying ‘incidents of a repulsive or horrible nature’ to minors.” 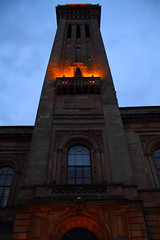 Yes. They banned the portrayal of horrible and repulsive things. And yet, there were still mirrors! And photographs! And TV news!

Oh, all right, we jest. Anyway. A British scholar is now disputing this claim, that it was American comics that started the scare — and we have to say we agree with her. We had many an acrimonious “discussion” when we arrived in this country, because a few of the people we met wanted to know how many guns we had, etc. etc. — giving strength to the stereotype that Americans are all violent, gun-happy nutjobs.

Despite the fact that few people carry guns in the UK, except for fox-hunting Lairds and such, we do find that there could be vast reasons for the amorphous fears of Glaswegian kids to burst into full-blown paranoia and panic:

This whole thing strikes us as quite amusing, and a good excuse to find a book of Scottish tales. Since it’s snowing again, and we have twenty-five mile per hour winds and the temps in the negatives (and the Met office says to expect that it will stay this way until THURSDAY), it sounds like a good idea to huddle up in bed with tea and a tray and a good book.

By the way, that ring of salt thing was apparently an ad for some movie; D. snapped a picture of the poster because he was sure it had something to do with slugs…

2 Replies to “A Tale for a Cold Night: The Gorbals Vampyre”