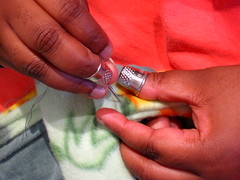 Every once in awhile, one finds something good to do with bits and pieces. It happens more frequently for creative people — we like to make Something out of Nothing, and to that end we have a whole closet full of bits and pieces just for this purpose — construction paper, coils of copper wire, glitter glue, ribbon taken from Ann Taylor bags, shiny rocks. Shells. Of course, this means that creative types are as bad as the magpies — worse, probably, because we only hear rumors of the birds’ penchant for hoarding little bits of ephemera; we’ve never actually seen them take anything. But artists… well.

We have friends back home who are worse than creative people. They’re would-be creators. They know they could make something out of nothing, if they could just get around to stripping that great big badly stained dresser sitting in their front hallway. They know they would have a gorgeous sideboard if they could find the time to repair that crack in the mirror and the sagging shelf of the one in the garage… These people collect projects and the tools they need to remake their projects … and then, the projects sit. And sit. And then, we inherit the projects, as the hopeful would-be creators pass their need to create and their hope of creation along to …us.

We have dearly beloved family members who have given us towering stacks of Time Magazine from years ago… don’t know what they were going to do with them, but they felt guilty because they hadn’t read them. “You like to read,” we were informed. “Here. Take these.” 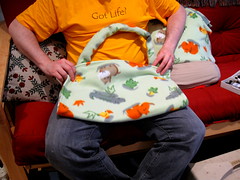 We do like to read. If we wanted to read Time we would have subscribed. So, with love and affection — there’s no point in getting upset or frustrated, is there? — we promptly put them in the recycling bin. (Actually their recycling bin, as we left the house.) After years of inheriting other people’s magazines, upholstery projects, canning jars, cars, etc., we understand that sometimes, those sorts of things are hard to do yourself. It doesn’t feel good to give up on our dream of someday becoming someone who will do that one thing which we always thought we would. It never feels good to give up dreams.

We have a family friend on the south side of eighty and we sometimes take a bit of hoarding off of her hands — because she really would love to get organized, and may not have as much time left as some of the rest of us. Scratchy wool yarn from 1968 in the same horrible avocado and puce shades which dominated the whole of the 70’s? Sure, bring it on, we’ll take it. And cart it right off to The East Bay Depot for Creative Reuse (a fab place for artists, teachers and early childhood folks to shop), or a local charity, or put it on Craigslist so that crafty people who want to knit it up, felt it, and make floor rugs with it (really all that puce and avocado woolen yarn is good for — after it’s been dyed) can find it. It’s just a small thing we can do for her, and it’s nice to be able to give people the feeling that they’re actually doing something — even if it’s not those projects they once were sure they would get to…

Of course, every once in awhile, we come across an actual creative person who simply gives us something lovely that is a part of one of their ongoing projects. We got that last January when our friend Bean gave us some snuggly fleece fabric remnants. Knowing that we often knit up hats for new babies, she thought we might be able to somehow incorporate them into gifts. 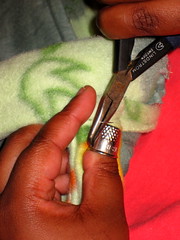 It was a long rectangular piece of fabric — too odd a shape for our original intention, which was to make a little bathrobe. With a lining, and enough quilt batting, we could have made a changing pad, but we weren’t sure how tidy that was — we thought maybe changing pads had plastic covers (for obvious reasons)(If we could have found plastic back fabric — a flannel-backed oilcloth tablecloth? — we would have given it a shot). Finally we opted for a well-constructed baby bag — for the baby. After watching T’s Littles (sibs) and now The Wee Men Wondertwins (nephews) dump purses and drag she and her sisters’ possessions all over the house, we thought the babies might like a soft bag for their own books and toys.

Not that it’ll stop them from dumping purses, shredding tissues, dropping cellphones and losing everyone’s keys. But, it’s the thought, yes?

The bags are sturdily made, in case the mothers might like to use them. Apparently Cooper’s mother actually carries HIM in it. He is apparently amused by this. He is a very giggly little person, so this is all right and good. T. spent a lot of time reinforcing the handles by hand — the myriad folded layers of cloth required pliers to pull out the needle, but it was a fun dual project, and it was a good feeling to pull out T’s mother’s old sewing machine and use a few pretty bits and pieces of Nothing to make Something.

Meanwhile, those of you who have had to give up the dream of being the person who would do these fantastic projects — you do know it’s okay to keep dreaming, right? Set the old dream aside, and dream yourself again. And again. And again.

2 Replies to “Something dreamed from Nothing”