It’s been a busy month – and a strange one. T. is gathering elastic, dye, and fabric glue, and eying her increasingly baggy wardrobe (-3 stone and counting) closely, as she’s become obsessed with the New Dress A Day website. (Yes, be afraid.) D. is prepping the curriculum to teach his first online course, which requires a lot of time ignoring the computer and a critical reading various 80’s novels which have nothing to do with anything, but which nonetheless make him happier than prepping his curricula. As the rest of the country wallows in snow drifts, the West Coast reprises The Great Dust Bowl Drought of Epic Proportions. No, really. Pretty soon there will be a name for it, like Polar Vortex or something. We would give a lot to have some of the East Coast’s snow melting over our parched lawns here, but as it’s currently snowing in TEXAS, maybe we’d better be careful what we wish for…

At the beginning of the year, there’s often an uptick of “Three Ingredient X,” or “Almost No-Fat Y” recipes that come up on food blogger blogs, as everyone frantically pretends to be virtuous and conventional-wisdom-on-diets compliant. We’ve avoided that trend entirely by making Tri-Sugar Tropical Banana Cake. It’s not just ONE kind of sugar, it’s THREE. Beat that, non-fat people! Of course, it’s three sugars, but three natural sugars, in reasonable small amounts, which makes it lower carb, and a reasonable snack. This was a “dump” recipe that T dreamed up because she wanted banana cake and was tired of *cough* waiting for other people to make it for her. And for the people who whined that they, too, had blackened bananas sitting in their fruit bowls at home, and why couldn’t T come over and help them – well. This is why God gave you exchange students and an oven, right? Here we go:

And, note, it’s not banana bread. Like our Scottish friends, we’ve decided to call it as we see it. If there’s more than a couple tablespoons of sugar in there, it’s CAKE.

Preheat oven to 350°F/175°C. Oil or parchment line a 9″ cake pan or two 9×5″ loaf pans, to have one to freeze. This is one of those recipes where you can truly just assemble the ingredients in order, dump them in the bowl, and get on with things. The batter is a muffin batter, meant to be chunky, so while you want your flour to be fully hydrated, don’t worry about mashing your bananas to more than chunks – you don’t have to puree them. Bake your cake for fifty-five minutes, or, in the separate pans, bake for forty minutes ’til golden brown and an inserted bamboo skewer comes out clean. (DO test with a skewer every ten minutes after the first thirty-five – depending on if your flour was kiln-dried or not, your mix may need more or less time.)

The riper your fruit, the sweeter your cake, so be sure they’re really well freckled and fragrant. Be sure of your honey! The stuff that comes in the squeeze-y bear often has sugar added – you want real, plain honey. For your health, make sure it’s from a safe, local source. You can also use maple syrup or agave.

The pistachios were a last-minute addition. They’re so plentiful this time of year, and less expensive than usual, and made a nice change from walnuts. The shocking glimpses of green in the bread also had their own appeal. Small children may turn up their noses at this – which is crucial in the More For You category.

Sadly, what with assembling a large piece of Ikea furniture (goodbye weekends, hello *!%$*#& Allen wrenches), getting a new robot vacuum cleaner, and making a jump-start on Spring Cleaning, in deference to T’s allergies, we never got around to staging and photographing this — erm, cake. However, we are not immune to your need for food photos. Here now some completely gratuitous pictures of Rhubarb Jam Tarlets from when we received farm boxes of the stuff, and couldn’t eat it fast enough. Please ogle responsibly. 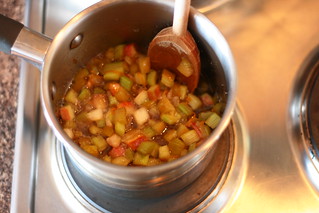 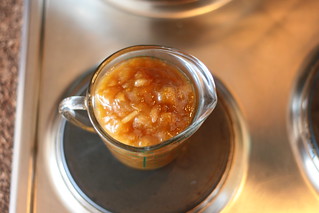 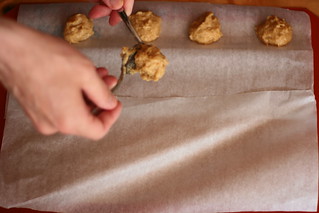 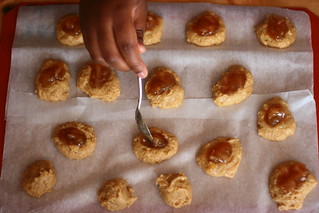 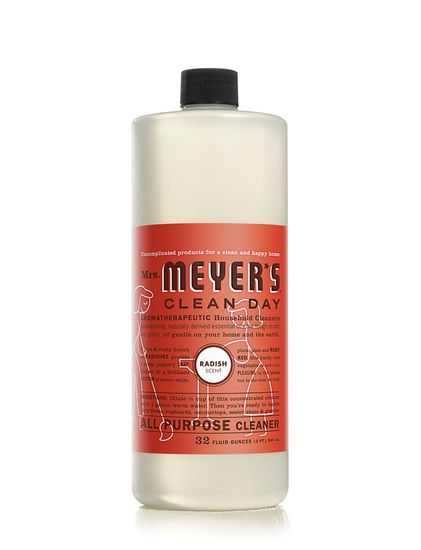 We mentioned back in September, T’s youngest sister was facing kidney failure. Just last week, she jumped to the top of the kidney transplant list, and voila – a new internal organ became available! After a three-hour surgery and a very boring week-long hospital stay, now the hard part begins – making that sucker stick around. This means a six months period in which Bug mourns that she cannot get her ears pierced, dye her hair, or attend school. She is also on major drugs which, while ensuring her body doesn’t reject the new organ outright, also bring her to some fairly intense emotional highs and lows – literally, there’s been hysterical laughter and hysterical sobbing within the same hour. It’s like all your teen years all at once, on Fast Forward! It’s a bit crazy-making for the family so far, but y’know what? Life is worth whatever struggle…

As someone who has had her share of being housebound for illnesses in the (hallelujah, far distant!) past, T’s convinced that our old and pine-tree-dust-prone house can be made into a safe Destination, for when Bug gets sick of her own four walls. To that end, she has gotten deeply involved with cleaning products which will aid in purifying the house, but not offend D’s sensibilities or annoy her sinuses in the process. Enter the Mrs. Meyers Clean Day line of products. Yes, yes, everyone has heard of them by now – we’re always late to the ball game. We’ve gotten fond of their lavender dish soap, which makes the whole kitchen smell nice. But T’s mostly bemused by them because she has been glazing over, staring at gardening catalogs lately, thus was enchanted into ordering Radish All-Purpose Cleanser. Yes. Radish-scented cleanser. We know what they sharply flavored little buggers taste like — but what does radish even smell like??? Tune in next time, inquiring minds will be told…