The weather continues to cycle wildly, like a fractious, teething infant. Squalls and torrential cloudbursts followed by misty blue skies and bursts of sunshine. Though we lost our travel partners for the day – Dundee was hit with FAR more of the storm cell – we thought that we were okay to take off yesterday and go out to the Crannog Centre on Loch Tay, because the Beeb reported that the worst of the torrents was long gone, and all was well.

All was fine – getting out to the A9 was fine – and we were feeling pretty good about ourselves for managing a dual carriageway when only days before, managing surface streets in a car that felt backwards and weird was A Bit Much. We listened to the SatNav, which is what people call the GPS here, and found our exit, turned off the freeway, and…

…into about two feet of standing water. Well, one can’t stop on a freeway, so we kept going, even as T. quietly screamed in the passenger seat. Fortunately, we went directly uphill… into gravel. The road was in the process of washing out, so there was gravel and big rocks all over. With his passenger still quietly screaming, D. carried on, with the idea that the uphill of the road meant that we would clear all problems eventually. All it meant to T. was that we’d eventually have to go …downhill.

And did we mention that this was such a narrow road that it seemed to be a single track? And that people were coming down from it at great rate, but no one was going up?

(And speaking of “at a great rate,” good grief do Perthshire drivers just whiz along. Apparently a little hydroplaning on a stormy day never hurt anyone.)

Scottish roads are good for having lay-bys, or turnouts, as we call them in the States, but we whipped past the first couple without noticing them, because they were tiny. Small streams and rivers flowed merrily over the road as we finally found a driveway and began the laborious process of the twenty-point turn. We were rattled and dismayed (again, what is this WE?), but once we returned to the main road, we decided to press on to Pitlochry, which is basically a tiny town with a distillery and a fish ladder and so many shops that it feels like a brightly colorful outdoor mall with pots of flowers strewn about. Pitlochry is an exercise in not buying things, as there are so many little bits of tat here and there that you could buy something from every store. We resisted — because we were there on a mission. Or, rather D. was. 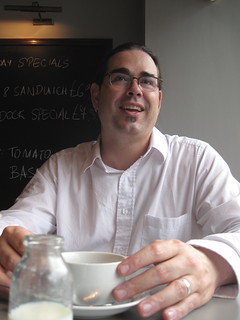 In 2008, D. bought a wallet from a shop. He needed a Scottish wallet, because they have change purses and pound coins just don’t fit properly into an American wallet – nor do Scottish bills, because they are wider. The new wallet was something like his second or third in Scotland – he’d been unhappy with all the others – but this one was handmade, and he was thrilled with it. Fast forward to our return to the States, when he decided not to swap wallets back to his old American one… fast forward to today, when it is literally falling apart. “I’m going to find that shop,” he said, and set off in the rain, through the streets of Pitlochry. “I think it was… right in the middle of town, by that one hardware store.” And with that vague idea, followed by a dubious spouse, the adventure continued. 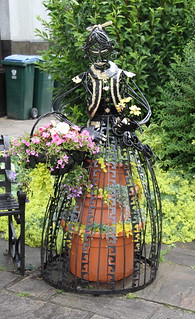 And, because Scotland rarely changes what works, and Pitlochry is nearly the same as it was years ago, the shop is still there. The proprietress is still there. And, the style of wallet? Astoundingly, still there. D. opted for a wallet that is a little longer than his original, so that it accommodates both kinds of bills, and while it doesn’t have a separate zippered compartment for his Icelandic money (which he carries everywhere, as one does), it literally fits the bill.

It’s been an unusual week, having a car in Scotland, and next week we’re back to the kindness of friends fetching us from train stations and towing us around, and a great deal more walking to and from as well as around and through. While this will likely mean fewer breathless moments with roundabouts (!!!!), it will definitely mean lower blood pressure all around!

2 Replies to “The Further Adventures”