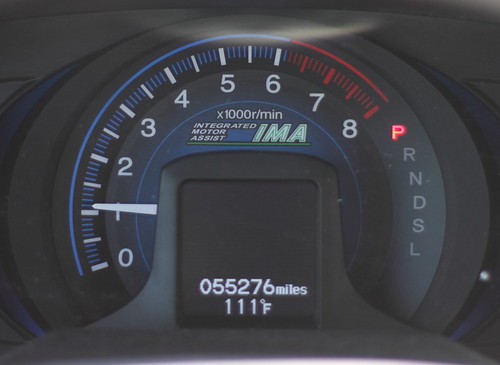 Does it make a difference that it’s a dry heat? Yeah, but not much.

“You’ll have missed the best of summer by the time you go home,” a Highlands shopkeeper said mournfully, as we ducked into her shop to get out of the rain. Och, not a chance, missus. 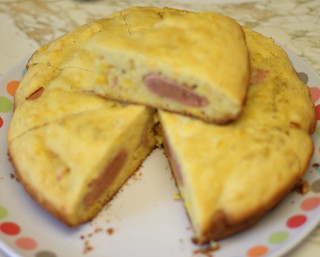 Welcome to August in California in a drought year, where there’s plenty of summer to go around, in these parts (and it’s usually 10-12 degrees warmer in Vacaville, where D. works and where this picture was taken). We’ve now been thoroughly acclimated back to summer in Cali, and have been home for two tiny heat… spikes – can’t exactly call them waves when they only last two days – where the temps hover near 100°F. Today is the second time we’ve had to turn on the air conditioning and have contemplated setting up our camping cots in the basement office to catch some cool while we sleep. It’s rare that the bay breeze doesn’t catch us — but when that preternatural stillness hits, we know it’s going to be a rotten, hot day. Fortunately, we really don’t get those too often, as close to the water as we are, but we do have a few hard-and-fast hot weather rules:

#1 – make small, quick salad-based meals and stock up on juice bars; no one really feels like eating,

#3 – Don’t even so much as boil water indoors (except in the electric kettle) when the temps hit 93°. 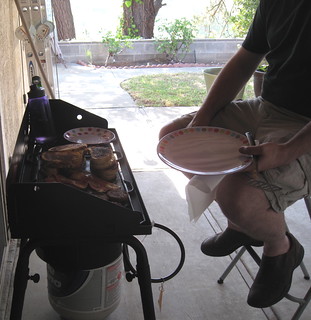 Outdoor gear comes in handy at home this time of year. From the camping cots to the camp stove, in really hot weather, we use it all. A two-ring gas burner with a propane tank attached is great for grilling and baking — we blackened tomatoes – from our own garden! – and peppers to make a piquant and spicy pico de gallo, which is really tasty. We also made cast iron skillet cornbread with our lidded Lodge iron skillet. The lid helped it bake evenly and stay moist, as did the frozen corn we added. Using less than three tablespoons of almond flour in this corntastic dish created an amazing flavor – we’ll definitely do this quick-and-dirty dinner again. (Throw hot dogs and chunks of cheese, onions and a bit of fresh or frozen corn into your batter, and it’s a meal-in-a-pan. It’s a cross between corn dogs and casserole. Just add sliced tomatoes and cukes.) 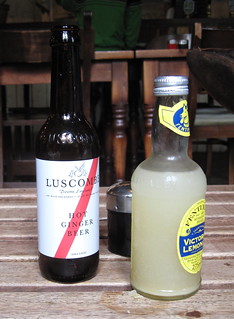 The one fly in the ointment is the curious trio of raccoon who have dug up the strawberry bed entirely (!!) and are quite interested in the camp stove and all of our outdoor doings – but fortunately opposable thumbs in this case don’t mean that they can cook.

Because cooking and eating aren’t that interesting just now, we’ve gone into new experiments. We had the MOST amazing ginger beer in Scotland, put out by a company called Luscombe in Devon, England. It’s made in a village called Buckfastleigh.

Aside: Yes, let’s do take a moment and consider that name. Buckfastleigh. Ah, yes – this particular village in Devon also is home to BUCKFAST ABBEY, notorious makers of the hideously destructive delinquent Glaswegian crazy-fuel, BUCKFAST TONIC WINE, aka “Wreck the Hoose Juice.” Aye right, keep it classy, Glasgow. (Actually, that’s one of those names that was always in the paper – we never heard Actual People call it that.

Yeah, so it’s THAT Buckfastleigh. Just blows the mind that two such notable drinks come from the same region…)

Notable to foodies seeking an aggressively comparable non-alcoholic drink in pubs, Luscombe’s Hot Ginger Beer burns all the way down, yet soothes the stomach. Not too sweet, with a crisp bite of lemon to sharpen the gingery glow, it is a perfectly lovely thing to drink to warm you up – or cool you down. They make a Cool Ginger Beer as well, but we hadn’t the patience for that nonsense. Ginger is supposed to bite. Sadly, not at all willing to pay $65 to ship a twelve-bottle case to our house (!), we decided to put our intellect into finding out what’s in the stuff, and recreating it ourselves. Because, why not? Ginger beer is straight forward. It’s only ginger root, sugar, and water, right?

Actual ingredients include spring water, organic raw cane sugar, organic root ginger 3%, organic Sicilian lemon juice 3%, brewers yeast and CO2. Those are the simple ingredients, and we’re pretty sure the CO2 also occurs naturally when the juice is bottled, as it is a byproduct of fermentation anyway. Ginger beer is a relatively old recipe from the times when water wasn’t always the best option to drink, and people drank small beer or ales. Ginger beer is actually very slightly alcoholic — you can’t really make it without naturally occurring alcohols cropping up. That’s an immutable fact of making a fermented beverage – and yes, the good ginger beer and root beer, too, is fermented and filled with those good-for-you lacto-bacteria, just like kimchee or soy sauce. The trick is to allow for naturally occurring alcohols, but not intoxicating alcohols, so it has to be watched and smelled and stirred daily. 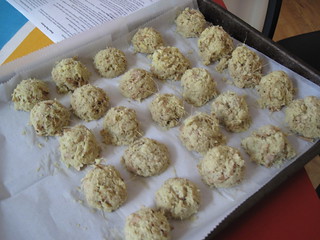 We began by processing fresh ginger root. In this weather, any fresh fruit or veg goes round pretty easily, so we found that chopping it up – skin and all – and freezing it assured that we’d have it as needed, and it thaws quickly and easily with no change in body. 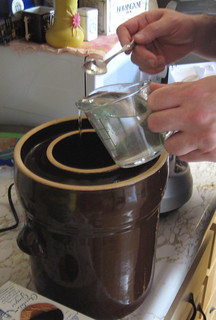 Next, we worked on creating a “ginger bug,” which is a starter brew for fizzy fermented soda. It’s simply ginger, sugar, and water and three days in a crock to grow the necessary bacteria. Ginger beer from American brands like “Q,” readily available British brands like “Fever Tree” and gingery sodas from the Virgin Islands are based on a brew like this. Some people worry about adding sugar to this — they don’t want sugary sodas like they get at the store – but the sugar is for the yeast and bacteria, not you! It will be mostly eaten by those little critters, leaving you with just enough, if you do it right. (Of course, we didn’t entirely follow any *cough* recipe – we’re still fiddling, but this is a guideline.) 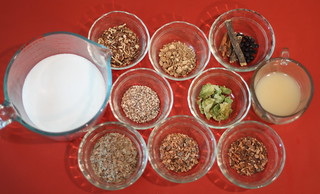 Originally, root beer was made out of …um, roots and molasses. We compromised on a variety of recipes and chose one we liked. In these containers are sarsaparilla root, ginger root, licorice root, a cinnamon stick, and juniper berries; wild cherry bark, hops flowers, a 1/2 c. of “ginger bug;” wintergreen leaf, birch bark, and dandelion root. This is the basics from an 1840 recipe for root beer. Hops are bitter, and they’re what’s in beer to make it bitter, so T. was fairly skeptical about their inclusion… and since we had no brewer’s yeast, we used fresh yeast from the bakery. This… may have been a mistake. Next time we plan to include sassafras root (we accidentally ordered sassafras leaves, which are great for including in gumbo, but not so much in here) and molasses, and a kefir starter, which hopefully doesn’t smell quite so …raw.

The fermented soda experiment is ongoing, but a few things have been learned. First, OPEN ALL BOTTLES GENTLY and IN THE SINK. We had a root beer tsunami the other day, and it wasn’t pretty. The amount of CO2 collecting under the the lid of a bottle can have fatal force – open away from you, just like you would shaken soda, or champagne. Second, lemon juice is brewed soda’s friend – it adds a lot to the blurry medicinal flavors of roots in the root beer, and helps to sort of …cut the raw, yeasty smell. Thirdly, there is a hair-thin line between healthy fermentation and hooch — on hot days, things may go TERRIBLY wrong, very quickly (this hasn’t happened to us yet, but we’ve been warned all over the place about exploding bottles and out-of-control fermentation. We are not making booze! Promise, Mom.) Finally, we’ve learned that though we are willing and eager, making homemade root beer is going to be harder than we thought – the flavor we’re chasing is elusive, and the smell is off-putting to everyone, even veteran booze-drinkers (D took some to work for his coworkers to taste. Once they got past the smell, they all said it was good; T and Niecelet Flea said a definite thumbs down). We’ve concluded that Americans don’t really drink “root beer” so much as they drink sarsaparilla – the flavor of ours was nothing like root beer, except the one time we got root beer from a health-food store and were horrified. We’ll be aiming more for sarsaparilla next time.

The ginger beer is definitely easier for first-timers. We rather like the ginger beer – though T says it’s nowhere near as strong and lemon-y as it should be, and since she drank various brands everywhere everyone else had a diet Coke, she ought to know. T suggests dried ginger root will be added in copious amounts next time, along with fresh, to the ginger bug, and and lots more lemon juice in continuing incarnations. Stay tuned!

Hope you’re finding ways to keep busy and creative in the hot weather – or the wet weather – or wherever you find yourself. Savor every day of summertime – too hot, or not. Life doesn’t resume when it cools down or heats up, or is some ephemeral right temperature – it’s right now, so enjoy.