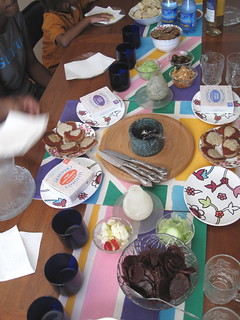 In our continuing efforts to explore the world of artisan vegan cheese with T’s mother, we threw another “wine” and “cheese” (for every time you read that word, substitute “cultured nut product” or something) party to sample some of Miyoko’s autumn offerings – but this time added the raw cacao offerings of Coracao Confections to the mix. The Wee Elf let us know that he was disappointed that we hadn’t simply invited him over to have more Sharp Farmhouse cheese, and his little brother continued to not really taste much, but no matter – this time the Littles were along to make snarky remarks (can you really call the 15-26 group Littles anymore? Yes? Forever? Right-oh, then) and The Aunt came to take teensy, tiny tastes of this or that — and then enjoy more than expected.

That’s the fun of these little tastings – we are all surprised – usually pleasantly – by our responses. Nobody (except maybe T’s Mom) goes into these tastings expecting to love the food – we have chips and salsa on standby, at all times – yet we don’t need them, which is nice. This time our taster’s responses ranged from the pleasantly surprised, to the “Hm, that might be okay in a dish” to the, “Oh, dear Lord, no,” end of the spectrum. What one person views as a hardline NO, another person views as an opportunity to take all of the plate home with them – which wasn’t a surprise. In addition to the chips was homemade pico de gallo, kimchi and pickled veggies and as always, a lot of laughter and rude commentary. 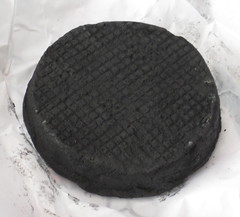 We started with the scariest cheese in the bunch – the one covered in charcoally-powdered-ash, because why not go all the way out there? The Mt. Vesuvius was slightly firm, with a dense smoothness that clung to the knife. The …smeary black ash was finely powdered and stuck fast, not coming off on anything but fingers and knives. It was quickly ascertained to be tasteless, but still made for some very worried, unhappy faces as it was passed around the table. The Elf demurred quietly. The Aunt reminded everyone that charcoal was a time-honored remedy for a sick stomach, so with tentative expressions, tasters went for the first bite… and said, “Huh.”

Second comment: “Oh, hey, that’s really good!” Third comment, tied with action, “Pass it back, would you?” And then the tasters tried to bogart that whole plate for themselves, even before Elf could finally have a taste and put in his bid for trying to keep the plate. Typical, really. 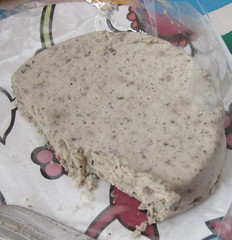 Our second cheese was one we knew would be rich and unique. Truffles are kind of a big deal amongst foodies, and though not everyone in the tasting group were fungus-fiends, we figured that we needed to at least try the stuff and thereby hold up the standard for dedicated California foodies, or they’d come and take our license or something. We opened up the French Style Winter Truffle wheel with expectation of a complicated and sophisticated flavor. I mean, we had no choice. The description uses the word “umami.” As in, An elegant, woodsy, and earthy wheel marbled with truffle-scented mushrooms. Explodes with deep umami flavors in a luxurious creamy base. We were going to come away from this cheese having had An Experience.

And the Laurel and Hardy convention rolled along from there.

This isn’t a bad cheese. It’s creamy, spreads well, is studded with little mushroom-y pieces — but the prerequisite here is that you must really like mushrooms to feel like this is your cheese. Our group is… slightly indifferent to mushrooms, unless they’re on pizza (the Philistines). Conclusion: Melted into a bowl of buttery pasta (dairy-free butter, of course), this cheese would be amazing… just not so much for us on seedy or rye crackers, fruit, cucumbers, or any of the other things we had to pair it with. Maybe an especially sour sourdough could redeem it? It has a real richness and creaminess that needs… something more. We just don’t know, not having elegant enough palettes for that umami! Not disappointed, though. Onward! 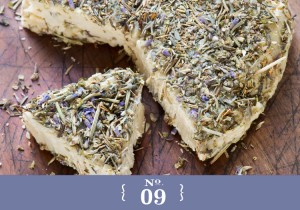 You’ll notice that the Country-Style Herbes de Provence picture comes from the Miyoko’s Kitchen website… as unfortunately, our photographer got busy with the pickled cauliflower and some ashy cheese and crackers and forgot to take a picture… *sigh* It is so hard to get good help these days. Anyway. The herby name is evocative, as the cheese wheel is indeed smothered in gray-green herbes de Provence – which include thyme, lavender, and rosemary, but sadly, no purple flowers on ours. The herbs give off their scent as soon as the knife cuts through the product. The cheese is quite firm – enough so that you really can slice it instead of spread it – but we found we liked it better a little softer. This was a taster positive, though not the favorite the Mt. Vesuvius was – it confused some of the less sophisticated palettes of the younger set, and for others, the lavender taste was interfered with by its sweetish smell, making the cheese sweet, but others appreciated the texture and flavors. Softened, the herb-y schmear on crackers was mild and nutty. 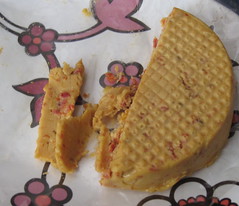 We next moved on to the Double Cream Sundried Tomato Garlic. We knew this one would be well-received, because the creamy, mild and buttery flavor the cultured cashews had in the Double Cream chives are so like Boursin, and could only be improved by pairing with other flavors. The Sundried Tomato Garlic didn’t disappoint. Creamy and tangy, the garlic just a hint and the tomato not too acidic, it reminded us of a familiar and well-loved dish… smeared across a piping hot baguette, this would be a lovely dairy-free pizza type of thing. So, so zesty, creamy, and tasty! For fun, we tested an additional cheese at the same time – but it was a Fresh Buffalo-Style Mozzarella. The cheese, unlike the other wheels, wrapped in waxed paper, came in a cup, where it was packed in brine to keep it fresh. It’s not a particularly pretty cheese, looking much like dairy buffalo mozzarella, except more of a beige-y ball, not stark white.

To taste the cultured nut “mozza,” T. made simple open-faced pizza breads with a plain tomato sauce and medallions of this cheese, which managed to both melt and brown, though not stretch. Surprisingly, the smallest Wee liked the mozzarella best … or, perhaps we should say, he simply chomped happily on all the pizza breads he could reach and asked for more, apparently not noticing any difference between dairy mozzarella and Miyoko’s Buffalo-Style. The six year old palette… is surprisingly robust at times. Or indifferent. Anyway. Our conclusion on the mozzarella is that it is a workable substitute for pizza, and we’ll have to make an additional tasting to see if its mild, nutty flavor holds up to basil, balsamic vinegar, olive oil, and pear tomatoes – which is how one also eats buffalo mozzarella.

We veered from our cheese tasting to try Coracao Confections. These chocolates are coconut sugar sweetened, easily found in the Bay Area and ordered simply from the company – big pluses for our non-California readers – and contain 81% cocoa, so they’ve got that deep, dark, good stuff that’s healthy. All of the organic, raw, dairy free, gluten free, soy free, low-glycemic, heart-healthy stuff aside, at the end of the day, truffles are made wth sugar. Of course they’d go over well with the tasters, right? …Kind of. We sampled Raspberry Fudge which got a thumbs up. Rose Truffle which got a confused, “Okay, that tastes like flowers” thumbs up – and it did, the light and lovely rose came through clearly – this was followed by an enthusiastic two thumbs up for Tangerine Bee Pollen, though tasters were again confused and dubious about including pollen in anything they ate, and wondered if the local pollen was supposed to help them combat Bay Area allergies (probably, but one would have to eat a lot more truffles than just one or two to … oh, wait, that’s not a bad idea). Surprised by the Berkley Bar, tasters found this one a good second place, and agreed that it indeed was very much like a Snickers, with raw almonds instead of peanuts. We finished with Peppermint Patties, which contained fresh mint and chlorophyll for a bright and impressive green filling – and…the coconut “bacon” truffle. 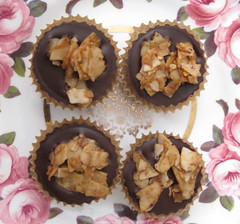 (We can see our friend M. now, giving us a distressed and disbelieving look, with horrified head-shaking, mourning, “Vegan bacon!? Now, that is just wrong. Wrong.” Yeah, well, we live in a world that puts together chocolate and KALE “granola” – of course called “kalenola” – you have to learn to roll with the punches with the California vegan foodies, all right?) In this limited edition truffle, they took flaked coconut and coconut sugar, and then add Hickory Smoke, and Applewood Smoked Salt and added it to the top in a crunchy, slightly salty topping… The smoky, crunchy, and a little sweet adds… something very distressing to some people. Surprisingly, this one got the “Dear Lord, NO!” from the lifetime veggies and vegans in the crowd – our omnivores thought it was actually okay to pretty tasty. So, does it really taste like bacon? No one in this house can say for sure, but coconut “bacon” has been a staple at Coracao for months, and has appeared in various guises – and it sells out, over and over, so people are eating it. …Just not these people, apparently. (FINE, Mark, you win.)

Especially those of us who took that one nibble too many, hit a wall, and made a lot of sad faces while everyone else ate. Poor Elf. It’s very hard to be eight.

We had so much fun doing this that we’re going to do it again. Next time, we’re hoping to grab some other cultured nut products we’re seeing get good reviews – Kite Hill’s artisinal almond milk fresh cheeses are showing up at Nob Hill, Vtopia is a brand coming to our area, and CHAO slices by Field Roast (the tomato cayenne is supposed to be amazing) are already in groceries like Safeway. We expect to encounter both the revolting and the revealing – and it’s all in the name of sharing something meaningful to some of our family (Hi, Mom!) and enjoying an entertaining meal. Cheers!