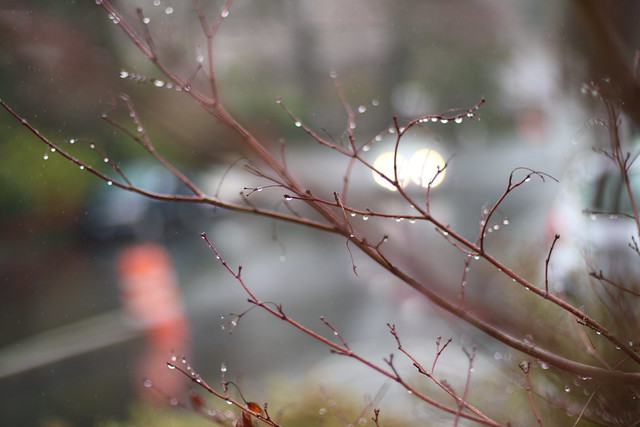 ‘Tis the season for winter blahs, endless cups of tea, difficult awakenings, and increased indolence. January lies within that particular limbo of “nothing going on yet” and recovering from too much going on. We are grateful to be healthy and to have the wherewithal to be a little bored. Bored right now is good.

2016 seems to be moving at a shocking clip — it seems inconceivable that we’re getting tax forms already, and looking at bills for car registration and insurance and all the other cyclical things that come round again and again. By this time of month, people have stopped going on about resolutions and have gone back to fearmongering about politics — what if my candidate doesn’t win? — fearmongering about the weather — what if after this El Nino, there’s another La Nina cycle with NO MORE RAIN?? — and in general bickering, unpleasant, cantankerous realities of American society. Definitely time to turn off the …everything, and go outside. 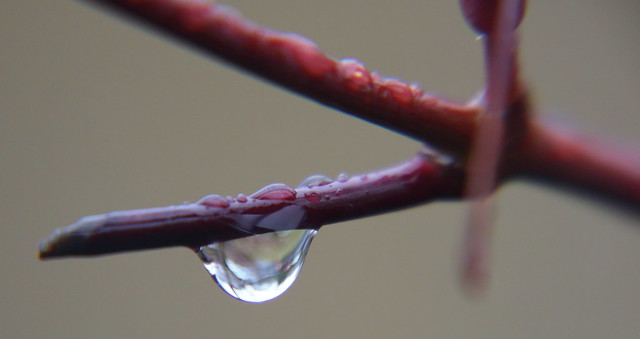 It’s odd how to think how much we’ve forgotten about a rainy season. We’ve been wakened by wind and rain more than once these past few weeks, have watched the previously dead square of yard tentatively take on a furred green aspect as tiny seeds of …something germinate. (Oh, please God, may it not be the ivy again. It took us WEEKS to dig that out. It’s probably ivy. *sigh*) Between the wooden slats of our deck, beneath the bird feeder, eight sunflowers stretch bravely toward the leaden sky. They’re all about four inches tall, but distinctive. If we could transplant them, we would. The dying pine trees — still standing, because the owner can’t decide on a company to come and remove them — seem like they’re shedding pine needles in thick carpets in order to provide hiding places for the tiny, darting birds which have multiplied by the hundreds. Even the hummingbirds – suspiciously hovering and glowering at all comers – have slowed their usual frantic circling to simply sit in the yard and watch this season unfold.

The Wees are selling oranges at their elementary school, and while our weekly farm box provides us with plenty of cabbage, root veg and citrus, we agreed to buy a bag. In the spirit of trying to use everything in the veg box that we can — we’re still making kimchi and pickling carrots and cauliflower — T. bodged a bunch of oranges in a pot the other afternoon and decided to make marmalade.

We’ve been in the marmalade frame of mind before. It didn’t go well. D. worked so hard to thinly slice oranges and lemons and carefully weigh out all the ingredients… and it never set. Worse, it bubbled over and made a mess, and we ended up tossing a lot of it after we scraped it off of the stovetop. This time, T. sliced the oranges by hand instead of with a mandolin, added some cloves, just because, put in a random amount of sugar, and … mainly forgot about it. This we call “serendipitous cooking.” As in, it’s serendipity that it didn’t scorch, boil over, otherwise implode, and it’s actually good. It worries T. when she manages things that D. hasn’t managed… mainly because she can’t figure out how it happened. 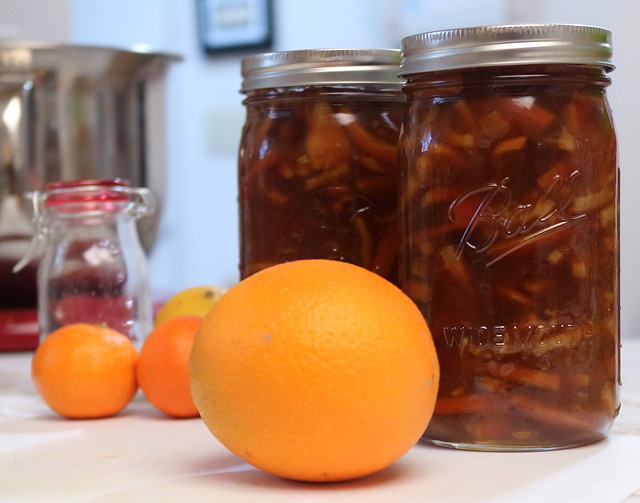 Marmalade aficionados suggest softening rinds with a long, liquid reducing boil, not overstirring the marmalade after it’s reached a boil, potting the jam when it’s warm, and not piping hot, and making sure the thinly sliced citrus fruits are not too thin. British marmalade is made with the peel separated from the fruit, but T. didn’t bother zesting the oranges, and ended up turning them off midway through the cooking process for an appointment. Putting them back up to boil afterward may have done good things for the pectin formation. Some marmalade makers add the sugar near the end of the procedure, to keep the end product clear and brighter in color. Others add brown sugar, to create a deeper flavor. Since we have a whole haul of frozen and sliced oranges in the freezer, we look forward to trying out a few of these ideas.

As it stands, this marmalade is quite good, reminiscent of the bittersweet and sticky Dundee marmalade we liked so well in Scotland. T promises next time to pot it in much smaller jars for sharing — until then, she encourages you to prep and freeze your own citrus glut; you never know what wonderful things marmalade can make better. D. likes it drizzled over pound cake or as a layer in a chocolate cake. Eventually, once we pull ourselves together to try angel food again, it will also go well with that… 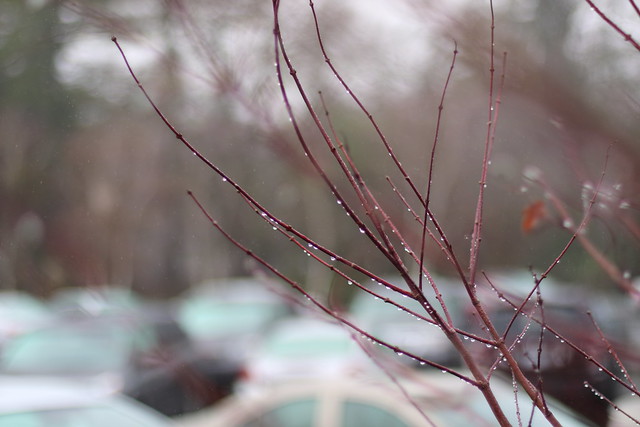 A hazy winter sun is emerging from behind a bank of gray-edged clouds. A piquant tanginess elevating winter’s earthy root offerings, the abundant orange is a little bit of sun to offset the tough darkness of what may turn out to be a pretty long winter. For that we can be nothing but grateful.