Should you visit this fair (well, sometimes; mostly it’s drippy just now) country, you should know that every trip to Scotland must involve a trip to Stirling Castle. This is just the way of things, because it’s a fabulous castle (Historic Scotland maintains their offices there, saying it’s the best example of a Scottish castle). 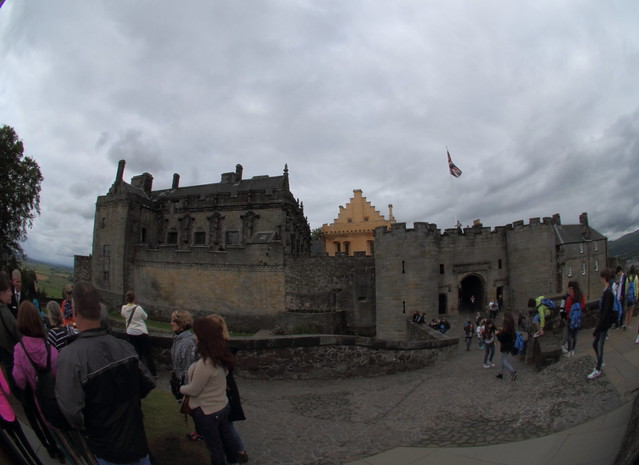 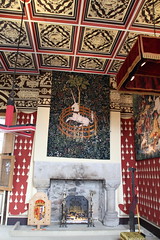 You’d think we’d be over visiting Stirling, since when we lived in Hayford Mills we were literally ten minutes away from the castle, but no. This time, we visited because they’ve been renovating the residential section of the castle the last 10 times we visited (OK, maybe it wasn’t 10 times – but the whole 5 years we lived in this country, it was closed). Anyway, they’d been renovating, and had had weavers in making tapestries using traditional methods (by hand, for years and years). 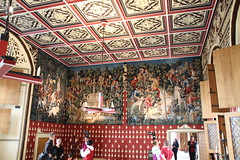 The tapestries are now installed in the residential section, which is completely redone to historically accurate specifications – including the somewhat garish colorings of the plaster walls and the ceiling. (We read awhile back in the Smithsonian Magazine about all the Italian statuary and castles which were probably bright and full color — when all that plain white marble is restored, it’s amazingly bright and whimsical looking). Together with the ceilings, the tapestries are quite magnificent, seen as a whole, rather than just randomly hung upon the walls in other sections of the castle. They represent thousands of hours of labor, with multiple people sitting down and weaving in pieces by hand, one thread at a time. They really stand out now, and add quite a lot to the castle as a whole.

We ended our time in Glasgow with the best of all things, and the worst of all things — Sunday, we had brunch with some of our dearest Scottish friends, and met some new and brilliant friends at a supper given for us — those were wonderful. The less-than-amusing Glasgow incident – typical for us, it seems – meant another noisy neighbor, and another all-night party Saturday night we couldn’t interrupt for love nor money. Though he apologized – upon being forced to – we’re happily done with the city, and now on to gorgeous, green Perth.

We’ll always remember this time in Perth – for a number of reasons, but because here we braved driving for the first time in the UK (What is this we, T???) — fine, D chanced driving, whilst T. gripped the dash board and prayed — ! It’s a challenge, because the car seems ridiculously wide and having the wheel on the side closest to the lane where other drivers are seems… odd. D. tends to drive wide of the center line, but with a little more practice, he should be fine. Even so, we’re staying off of major roads, and only got the car so that we could get to some of the more far-flung locations out in the country. (Because such great swaths of land are privately held in this country, the trains just don’t go East to West, because it’s private land and ostensibly the Lairds said no when the railroad came knocking.) At least it’s an automatic, so D. isn’t shifting with his left hand on top of everything else!

We are now staying at a newly renovated guest house as its second guests. We are quite happy for the modern conveniences, though there’s no gorgeous Georgian ceiling and crown moldings… it doesn’t leak, and it has all modern conveniences and it still smells faintly of fresh paint, it’s so new. It’s central to another group of friends, and some lovely historical places further in the country, and we’re looking forward to wringing all we can out of this pleasant location.

This week, we should make our way to the Crannog Centre, the gorgeous little town of Pitlochry, Dunblane, and to Scone Palace (rhymes with “spoon” – not the biscuity thing you eat with jam and cream). We’ll visit with L and the Weasels, and generally be tourists. 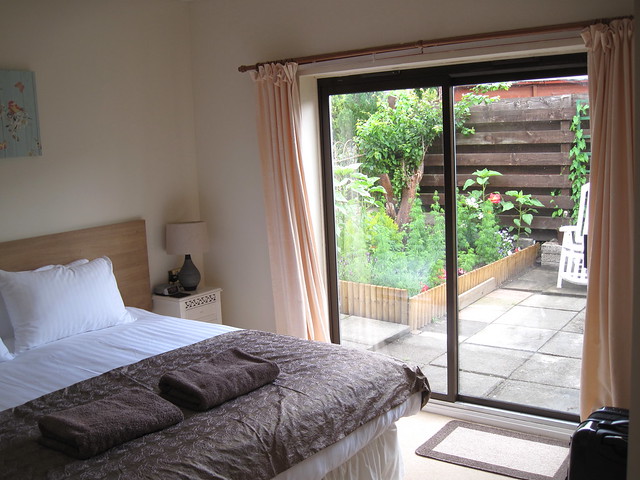 And now, it’s time to settle in with a pillow or two and a book. Half of our holiday has gone, and we must make the most of this leisure time.

One Reply to “And, hello Perth”