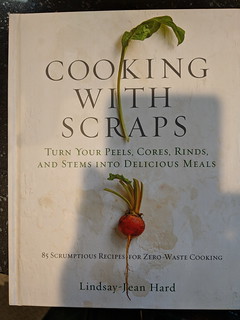 One might imagine that with Himself out on medical leave, all kinds of cooking and travel would be taking place. Well, no… medical leave, in this case, means you feel cruddy enough not to go to work and don’t know what the cause is, unfortunately. We’re working through it – and we’re mostly doing well, but sometimes it’s a slog, without a doubt. Still, there has been some experimental foodie-ing going on, because we wouldn’t be us without this aspect of our lives.

People talk about “adulting” in the sense of eating all of the foods in one’s farm box before it goes bad or eating all the produce in one’s fruit bowl before same. These are huge and worthy goals, dear people. We’ve extended our personal goals to really looking critically not just at our consumption, but at our waste, which the U.S. does a lot of – wasting food, that is. People on a budget considering seriously the impact of really using every single bit of a fruit or veg find that they can save a lot of money while expanding their creativity. It’s definitely a challenge. We discovered an entire cookbook for that purpose. It’s gorgeous and full of interesting recipes, but the one which caught our attention the most was… a banana peel cake recipe. Oh, yes – Banana Peel Cake With Brown Sugar Frosting.

NB: If you have a latex allergy, like T’s youngest sister, remember that banana peels contain latex – please, DO NOT EAT THIS CAKE or even try to make it, as boiled or processed banana peels release more latex than fresh. 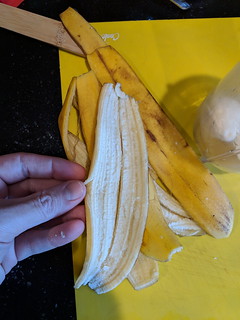 Normally, the idea of cooking with something that is limp, brownish, and usually crumpled up and put in the trash would seem problematic, but the cookbook author swears by this recipe, and said it tasted like the best banana bread, ever. Like the majority of West Coast folk, we’re big fans of banana bread, and the idea of a recipe with a controllable amount of sugar and carbohydrate, yet with still a rich banana flavor seemed remarkable – too good to be true. 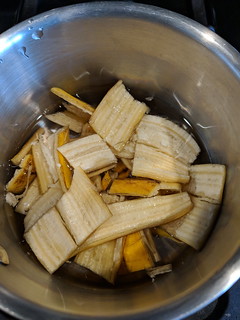 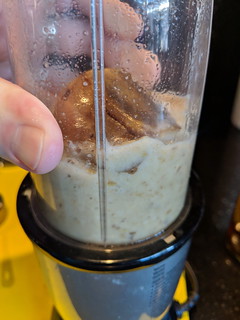 Not even going to lie – it kind of was.

This is not to say that it wasn’t a banana bread-shaped thing in the universe of banana breads, but for all of the accolades, etc., the cake itself was kind of …well, let’s not get ahead of ourselves.

The directions state that you need to remove both blossom and stem ends of the peel, then pry out and discard the white strings from the interior of the peel. Next, one is meant to boil the peel, drain it, preserving some of the water aside, and then to puree the peels. All of that was kind of fun, because it was… just so weird to be messing around with peels, which are so very obviously trash. We started the cake on an impulse, after making a morning protein shake — and if you look, our peels are just of normally ripe bananas. Not nearly overripe bananas. The cookbook strongly suggests you use very brown or almost fully covered in speckles peels, as one does when making banana bread.

But – without the gift of hindsight, we went with what we had, impulsively trimmed our peels, and tossed them into a pot. The kitchen smelled of bananas, as it always does when one makes bread, but it was a slightly …different smell. More rich, but also more bitter, and slightly tinged with an almost vanilla edge.

And speaking of vanilla – or spices of any kind – the recipe is utterly lacking in those. And that was a point of contention with our Baker. There are far too many baked goods in the world which don’t include, at minimum, vanilla. It might be argued that bananas are a relative of vanilla, thus not in need of it, but to us a good banana bread typically includes allspice or ginger or cardamom or at the very least, a simple pinch of coriander, or a bit of cinnamon even — anything, just so the bread doesn’t just have the flat, slightly insipid flavor of banana alone. But, no, not this time. The Baker compensated by adding in ground vanilla powder, but since we were trying to actually follow the recipe, we didn’t take it further than that. We probably should have. 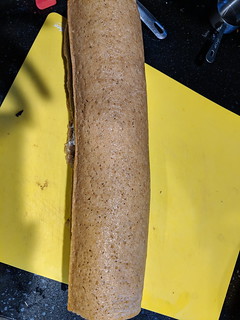 Something – the peel? the latex? – really informed the texture of this cake in both its baked and unbaked form. Baked, it is slightly springy to the touch, but sticky – really sticky, like Scottish Sticky Toffee Pudding stickiness, as if it is made with dates and a sugary syrup. Unbaked, but the batter is thin and unprepossessing. It didn’t really raise much, despite all the leavening, and it sort of came away from the back of a spoon like …well, not even like pancake batter – like a crepe batter. Noting the batter texture, the Baker decided to bake it as a roll cake, which turned out to be the best call. 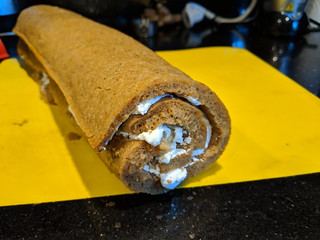 Like Sticky Toffee Pudding, this cake might best be served in the British way, with a sticky sauce, and eaten less like a cake and more like a bread pudding. The whipped cream in the center lessened the effect of the general stickiness, and everyone who had some enjoyed it. We …tasted it, and then said… “Meh.” 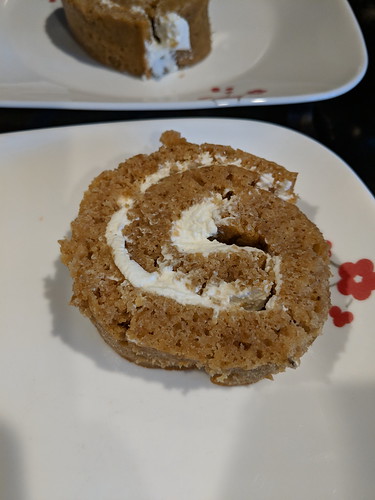 Though this was our first exposure to Peel Cake, it’s apparently quite common in, of all places, the magical land of Oz. The Oz – or Aussie – version of Dateline had it on their show way back in 2009 when cookbook author Edna Toledo came on to the show and made it. Her recipe uses far, far more peels and she says you can use orange peels in it, too. (Hm!)

A more recent NZ version has both peels and… avocado frosting, so you can… be… super… green? Or something.

We may have to try this again, because we must have done something wrong. Everyone says this is fluffy and delicious, and it’s hard to compare our ambivalent response to the rapturous descriptions of what is clearly a beloved cake, but… nah. Sure, the cake is okay, but life’s short — too short for cake that isn’t absolutely amazing. Why waste the carbohydrates? We’ll try something else.

One Reply to “Rubber. Glue. And… Sugar.”