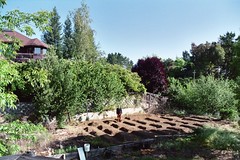 If you squint hard you’ll be able to see me in this picture. Yup – these are the first of the garden space, with 6’3″ me standing amongst the rows, by way of perspective. We’re so proud of our beds this year it’s not funny. And best of all? Tomorrow we go to pick out tomatoes!

Jackie from one thread two thread has promised to send me some crimson hot peppers in exchange for a few of our seeds from Kitazawa. I’m hoping that she’ll have some luck growing the Thai Hot way up there. (I looked at your address on a map, Jackie: you’re about as far away from us as is physically possible while still remaining on the same continent! And when you say “frost” I’m thinking that you mean something entirely different than we do down here!) 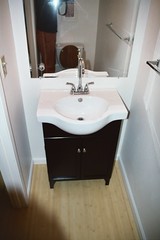 The remodel actually looks like we may wrap up this current stage (floors) soon. The downstairs bathroom (shown to the right) is as “done” as it’s going to be for a while. We still have to get some additional storage for it, and to bring back some of the missing decorations … and, oh, some hand towels would be nice, as would some soap. But, other than that, it’s the first room downstairs to be completely finished.

The stairs have to come out again, temporarily, because they squeak awfully. So, we’re going to not let them “float,” but are going to apply copious amounts of construction adhesive. It’s not a happy thing, to glue them down, because it’ll make them harder to replace if they get damaged. But … well, you do what you have to, because the stair noses are actually working their way loose, and won’t be worth walking on in a few months if we don’t fix them.

More tomorrow, when we know how many and what varieties of tomatoes we end up with, and when the builder has left … hopefully for good!