No pictures as of yet, but Friday we got a new finch. It’s that the other two (Flitter and Twitter – or Flit and Twit) had been acting … well, lonely, I suppose. We believe that they’re both male, as they trade off doing the strange little mating hop/dance that society finches do. Now, we’re OK with that, and they’d seemed to be OK with that, too, but they’d begun to really pluck themselves bald … so, we figured we needed to change something up in Finch-land. 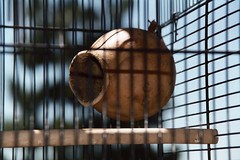 First change was to get rid of their nest and to switch it for the lovely gourd shown to the left. It’s one we grew last year, but which broke off, so it’s suitable only for a small nesting box like this. That was quite a significant change for Flit and Twit, and they regarded it as EVIL for quite some time, and still haven’t climbed into it. Based upon that worrisome behavior, we figured we’d get them a companion, since the nest wasn’t the problem … or something. We’ve since heard tell, from the Finster Log, that finches may ignore a nest box for over a year. But, we hadn’t found that particular link yet.

So, the decision to get a new finch, perhaps of the female variety. Send one of us to the pet store … and arrive home with a female finch, certainly. A female Zebra finch, that is, because … well, because I didn’t believe that zebras could be fawn-colored and drab. 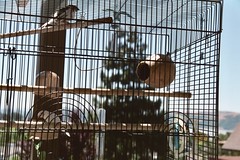 We’re waiting for the chaos to settle down. Twit has gone all still and strange, hiding in a corner. This is definitely not usual, as he’s usually the dominant one, and is quite fearless. Flit, now, has been doing the hopping dance. Considering that he was the one plucking out all of his feathers, I’m guessing that he doesn’t particularly mind that the female is of a different species, so long as the plumbing works. We’ll probably end up with some strange little half-zebra hybrids in a few months. I’m hoping that Twit will get interested as well, because Twit is the all-white one, and I believe that would be a nice cross. According to what I’ve found, the chics are likely to be sterile, but that’s not a drawback, in this case.

6 Replies to “Drama in Finch-Land”