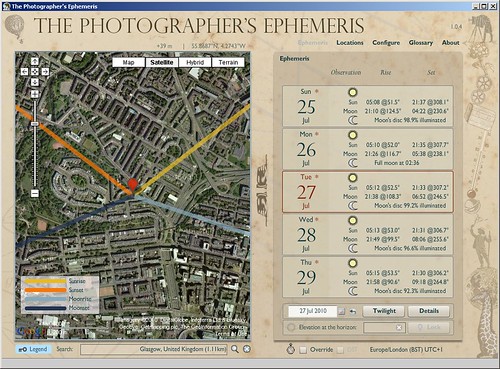 The Photographer’s Ephemeris (available at stephentrainor.com/tools) is a tool I’ve mentioned before. It’s useful because it tells you things like where and when the sun and moon will rise and set. It tells me that tomorrow morning’s going to be an early one (say, 5 a.m.) in the hopes of catching the full moon, on its way down, setting behind the towers. I really hope to awake early enough to catch it! Of course, it won’t be dark, still, as the sun will be rising 20 minutes before the moon sets. I’m going to try to get the shot before the sunrise, though, if only because the moon needs to be still in the sky if I’m going to see it from the flat.

We’ll see if a tripod-mounted series demonstrates that the camera alone was the problem, or whether there’s some lens involvement as well. It’s so difficult to tell. If tomorrow’s shots come out (and if I get any, what with clouds and fog), I’ll know whether I have to send the lens in for an adjustment.

Enjoy the moonset, if you’re up early enough!