Not that T. would admit it or anything, but food blogger Gluten Free Girl is HER kind of girl. GFG’s …contrary. Not only for avoiding wheat products – she spends her days quietly avoiding the same social things T. avoids, which are generally the things most normal people enjoy.

In high school, for T. it was Mel Gibson movies. Now everyone else sees the wisdom in avoiding them (and him)? While T. – who actually saw him in person on a street in Vancouver when she was seventeen – was unwittingly an early adapter nonconformist. Culinarily, if that’s a word, it took us years and years to get one of those silicone baking mats, when everyone and their dog had one. For awhile the food blogger world was all agog over Jaimie Oliver, salted caramel everything, and cupcakes, bloody cupcakes. You’ll note that no more than a passing mention of that has made it to this blog. T. looks at trend-setting things, and says, “Yeah, they’re cute. Meh.” And D. has a fairly virulent distaste for all things Oliver and an eclectic desire for random recipes that are old, require strange Devices, or the use of a crank and lightning at midnight. We’re erratic and oblivious and that’s the usual state of things.

So, when Gluten Free Girl talked about avoiding films like Forrest Gump (…Been there), Rain Man (…done that), and never watching The West Wing (…and have the T-shirt) and skipping culinary trends like roasted kale chips, T. gloried in the sensation of finding a woman after her own heart. And yet – last Wednesday T. got one of those best-friend emails that made confrontation unavoidable.

“Have you ever tried it?” was the innocent question.

(But one does try so hard to look like a well-balanced, prudent person in public.) “Well, not yet – but how does Friday sound?” T. decided to reply.

As much as we love kale around these parts, it seemed stupid to not at least try it. And after some hemming and hawing and checking out Gluten Free Girl‘s take on the recipe as well as Smitten Kitchen’s T. decided on an approach. 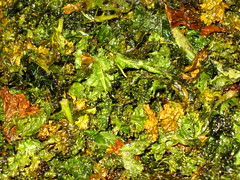 We would have preferred to use plain kale for this, but it’s not really deep into kale season here, for some reason, and the only way it’s available at Sainsbury’s, anyway, is pre-washed and pre-chopped in bag form. Not the way we want to deal with it, but since the recipe calls for tearing or chopping it into bite-sized pieces, it’s a way to begin. We used two bags of kale, which come in 200 gram bags… normally that’s a cup or seven and a half ounces, but with kale it was about five cups of springy kaleish goodness. (Most recipes call for about four cups, packed.)

We lined a bowl with paper towel and blotted the water from the kale, turning it and ruffling it with our hands. We went through and removed all of the stems (they don’t turn into chips – they’re wood, people). We then pulled out the paper and measured two tablespoons of olive oil into the bowl. T. massaged the oil into the greens.

At this point, some recipes advise the use of salt. We chose not to do this. 1.) Because we never salt food before it’s cooked, and 2.) Because salt removes water from vegetables, and if you salt before you roast, how do you know if you’ve used too much salt until it’s far too late? We also planned to use our Patented Popcorn Herb Blend on the kale, so chose to simply roast the veg. We turned the oven on to about 250°F/125°C and put the timer on for thirty-five minutes. And then we watched the oven like hawks. Depending on your greens, thirty-five minutes can be too long, and for the first time through this process, we wanted to be sure. 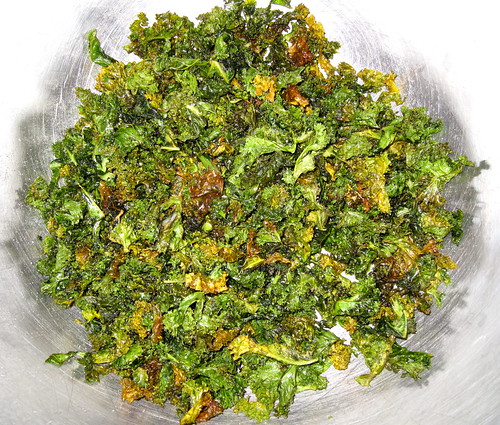 We pulled the pans out frequently, and at one point dumped the greens out and ruffled our fingers through them and put them back onto the pan. At such a low temp, the roasting took place in roughly twenty-eight minutes, and we were happy with what they looked like. We dusted them with the PPH blend and a bit of salt, and sampled. Hmm. We shook a few of the smaller pieces through a cooling rack and set them aside to grind and use WITH the PPH Blend. We sampled some more. And some more …

You know, the world is not always kind to innovators. Who was the first person who said, “Hey, let’s take the wizened grain of this maize plant and put it over fire and watch it explode, ricochet all around, and then let’s eat the white stuff that appears next?” Or, imagine the first person to decide that cacti would be really awesome if they could just strip off the spines? Or, T’s favorite question of all time, who decided to eat the round whitish thing that came out of that bird’s backside? There are some really improbable foods in the world. Kale chips are one of them. You might consider trying them, though. Not that we’re going to talk about it all day or anything. We’re not on any food bandwagon, here. But they’re good, in a totally non-conformist way.

BUT BE WARNED. Remember how we said we’d taken two bags of kale to make this? We munched our way, reading and writing email and blah, blah, blah, with hand moving to mouth (and to towel to keep the keyboard reasonably clean) over and over again… and then remembered: That was five cups of kale in each bag. Kids: that’s a lot of fiber. DRINK a few QUARTS of water, and put the rest of the tasty crunchies away.

No, do it NOW. Or you will be very, very sorry…

13 Replies to “Culinary, Quite Contrary”