You know you’ve made it in the world of volunteer culinary when you start getting requests.

He says, “Wouldja make me some of those cheese scones? Like m’grandmother used to make?” 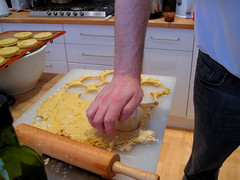 D. put off the scones with a box of Kahlúa brownies, which were an excuse for T. to decorate them with little gold balls and make the individual pieces look like dominoes (no pictures of those, sadly – they vanished), but after a cranky complaint from a dieting coworker, D. woke up Friday morning with the idea of a savory treat in his head – one the coworker didn’t like, and wouldn’t eat.

Cheese scones it was.

The recipe was somewhat of a surprise. D. did a bit of research, starting with the redoubtable Cynthia’s blog, Tastes Like Home, visiting the BBC Food page and passing by The Fresh Loaf for more inspiration. He did a lot of muttering. “What? Eggs?” he exclaimed. “Who puts eggs in biscuits?” We quickly learned that a scone is not a biscuit, no matter how similar they might appear to be. After a bit of poking around, we finally settled on a little input from each recipe blog, and roughed out a recipe that went something like this:

We differed briefly on the method of cutting the scones. T. is a drop-biscuit kind of gal, and D’s mother always cut them out, so he does, too. For the scones, T. wanted to have the wedge-shaped type, which are simply cut with a wet knife, and D. wasn’t having it. Compromise was reached by having a little of both. 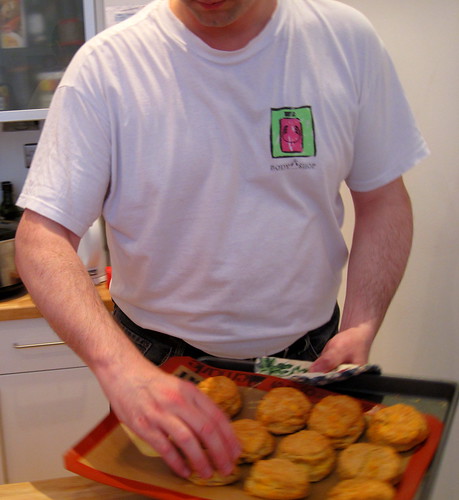 Though the dough was somewhat obstreperous – from the butter being dug out from the freezer and grated – the scones were almost as easy as biscuits, and smelled scrumptious when they were baking. They looked lovely, but after a taste test, T. was only “meh” about them. “They’re …buttery,” she said, and made a face. (T. does not like the buttery. Does not like the short. Does not like shortening bread, shortbread cookies, or pie crust. We know. We deal with her as we do all the insane: we speak gently to her and let her gnaw on celery like she wants.) D. was “meh” about them because he felt they should be spicier. We loaded the scones up to take them to our British Tasting Audience. Several Irishmen, a bunch of Scots men and women and a few gents from the Commonwealth countries of India and Africa were to be our subjects. What would they say?

Reactions were gratifying. Most of the British Tasting Audience (BTA) were excited to find the scones still warm. Several made gleeful remarks about their grandmothers, and moved to surround the plate where they lay. (Not the grandmothers. The scones. Stay with us, here.)

The original requester of the scones described them as “perfect,” which was a happy event – apparently D. is every bit as good a baker as his grandmother in at least one thing. And then, some of the BTA found the scones “spicy.” We can assure you that no more than a quarter teaspoon of Cayenne was added, so the word “spicy” in this context made T., who douses her food with Cholula at every opportunity, lie down on the floor and weep. However! The highest compliment was paid by D’s boss, who is a grinch-hearted grump before ten a.m. when the “trolley” comes by with sandwiches, bagels, and scones for elevenses. D. can rarely speak to his boss before that hour, and today — today his boss skipped the trolley and ate two scones. A happy, reasonable man prior to ten a.m.! (Well, a happy man, anyway. Let’s not push things.)

We’re still not sure if it was our recipe or the way we made the scones or what, but while this wasn’t a favorite for either one of us, they were passably good (and go well under beans, as if one was having beans on toast). D. is excited to have found a lemon rosemary scone recipe, while T. is pretty sure that scones are just made to be eaten with jam. Lots and lots of jam… and she saw a recipe that has the jam baked in on top. Experiments will follow!

The BTA is actually pleased to know that D. takes requests, and is plotting something else for him to make. Meanwhile, D. is not resting on his laurels, but is instead wondering how to make pierógi…

5 Replies to “A Scone is Not A Biscuit, And Other Friday Observations”