This morning T. perused what she calls the Island of Lost Toys: those pieces of costume jewelry which have become tarnished, damaged or broken which we’ve been saving to repair “someday.” This morning she polished up a few pieces and passed along to me those which simply required a bit of epoxy. Finally, she’ll have use of some of her favorite bits of sparkle, after having been without them now for months.

Just been thinking — we’ve been cooking, but nothing pretty or fanciful, and there’s been no knitting done here for a long, long, long while. It’s been difficult to remember to actually make beautiful things, much less to feel that we should wear or enjoy beautiful things. It’s not just the cold, the wet, the unending grim grayness, it’s weird things like missing color — sunsets, the peculiar shades of coastal skies, the colors of water and leonine gold hills. We’ve also spent a bit of time reading the news of the world, which paints things in even grimmer shades. That combined with the lack of a social life, and being in our own heads too much has brought creativity to a standstill. We probably need to get out more; we’re getting feral!

In California, we’d see the family at least once a week, and visit friends at least as frequently. Here, though, interactions are still sometimes strained, like we’re speaking a different language. Also, we’re both tucked into our individual tasks: me with the master’s research, T. with her writing (one more novel sold, and a deadline on yet another fast approaching). So … we’ve been neglecting being artistic for its own sake for quite a bit. 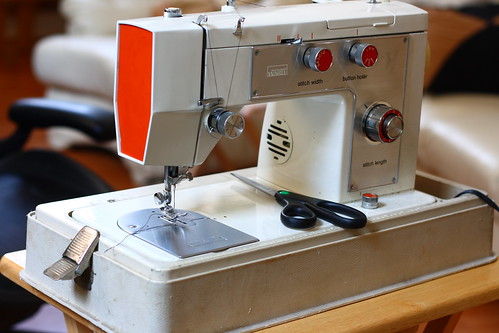 But, no more! It’s time for a change.

We’ve finally unpacked the “art box” – a big deal, since this box had remained sealed up during the entire nine months we were at our first flat. Now that paints, canvas, clay and inks are easier to get to, maybe we’ll get to them. We bought a transformer, so that we could use the sewing machine without it running a million miles per hour … and our first wee sewing project was to make “draft excluders” to push up against our doors, to block out the cold. Next is finding small enough nails, so that we can hang some art, instead of just propping it against the walls. T.’s got a skein of fine copper wire she’s been meaning to crochet into one of those airy looking beaded necklaces she’s been eying — like the one Is made way back in February.

And after that, who knows? Maybe I’ll pick up the knitting needles and whip up something like a manly cowl. We’ll get there, slowly but surely. Remembering beauty, appreciating craft. Perhaps we’ll even dress up and go out somewhere.

Life is short. Art is lasting. Here’s to bringing back beauty.