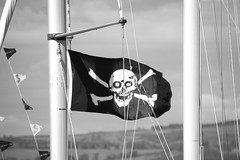 Our friend over at Short Sights discusses whether it’s OK to take photographs, and the pressures on photographers by those who think it’s not OK to photograph something. It’s definitely a balancing act, knowing when it’s OK to photograph and when not. We’ve said that wherever we end up next I’m going to link up with a local paper & ask to take photos for them, just so that I can get a press pass – that might make some things better in the minds of those who complain. On the other hand, here in the UK that means that the photos I take would fall under a different section of the UK Data Protection Act … at least, if I were going to use them for commercial reasons.

I’ve had people come out and ask me about what I’m photographing (usually it’ll be the architecture), but mostly it seems that they’re interested in chatting about photography, rather than caring that I’m taking anything from them or that I shouldn’t be taking photos to begin with. There have been a few people who have complained in earnest, but they’ve generally been people without knowledge of the applicable laws. I usually approach them in several steps: 1) show them the picture I just took, 2) explain to them why I found it interesting, 3) explain to them that the Data Protection Act permits me to take such photos, 4) ask them if they want me to delete the photo (and then keep it anyway). Of course, when I’m speaking with them I’m careful to smile the “tourist smile” and to make sure that my accent sounds as “Hollywood” as possible: being a tourist seems to put people here in a different frame of mind and they’re much more helpful and forgiving. 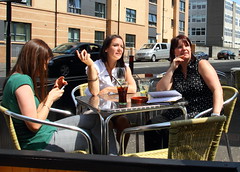 Of course, when I’m trying to take candid shots of people I’ll usually just shoot without aiming and hope that I get something decent (as in the three women from the help-desk where I work, out for lunch, to the right). Sometimes I’ll resort to using a remote shutter-release cable, with the release in my pocket, so that people don’t even see my hands near the shutter-releases on the camera. Other times I’ll use T’s wee camera, as it doesn’t make any noise while shooting. That’s not to say that I’m doing something which I think to be wrong – just that people get weird about photography sometimes, and it’s much easier to not have to go through the rigamarole of them noticing that I’m shooting.

Short Sights also mentions that there are some things which you’d feel obligated to photograph, such as a riot or something. For me, that has meant shooting such things as Orange Marches, here in Scotland. Mostly, though, I try to avoid anything of the sort, even though I have insurance on the camera equipment. And there are times when I know that I’d be putting myself in a bad spot for taking photos, particularly as the world seems a bit crazy about the whole “terrorism” thing and has turned to terrorizing photographers in turn.

As the technology gets better and smaller, though, I think that it’s going to be inevitable that people will be able to photograph anywhere, at any time. The only people who will be singled out and punished are those of us with the large cameras, even though the resolution on them is not so great as the newer, smaller ones. So, how can we change the perception that a large camera means something different than a point-and-shoot? Perhaps on the next upgrade I’ll go with something truly wee, just to avoid the controversy.

4 Replies to “When to Photograph”