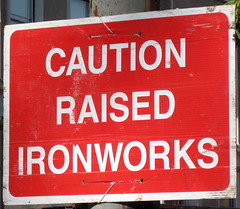 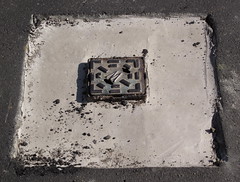 I wonder about this city. Really, I do. There have been some truly horrible potholes around the block, on my way to work. I’ve almost been hit by a car, which skidded after hitting one of them. Finally, after many months of enduring the potholes, the city has gotten around to repairing the road damage (only after having installed two new bike-lanes, mind you!).

Seems that there could be a solution to this, no? No. Makes work, I suppose.