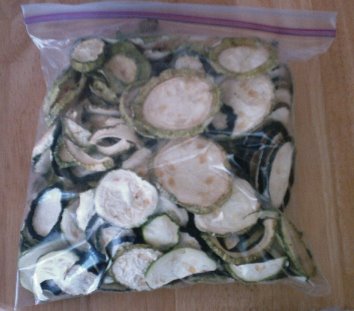 Just a quick note to say that our idea of drying zucchini (about twenty of the monstrous things shown to the left) for use later has paid off already. We’ve been wanting to engineer a vegan quick-bread, and have succeeded! We used the dried zucchini, cut up into strips using scissors, and it’s turned out to be a wonderfully coarse loaf. Alton was going to be in for a scolding with his measurements for getting a bread starter going (from I’m Just Here for More Food: Food X Mixing + Heat = Baking), as our whole wheat starter tried to climb out of the jar even in the fridge … but we just incorporated some starter into the loaf, and are quite pleased at the results.

We wrote down all of the measurements along the way, too, so that WHEN the bakery opens we’ll have this recipe as well as all the yeast breads.

One Reply to “Dried Vegan”