The mornings routinely hover in the low thirties, unless it’s raining, which gives us the requisite five degrees more which allows it to rain and not snow. The snow is forecast for this weekend, however, and this morning we awakened with the Dumyat and the Ochils powdered with snow for the second time this autumn so far. The light – we don’t bother calling it sunrise most days – struggles up around twenty-five past eight, and gives up wearily at around half past three. We soon enter The Great Dark, and yet our spirits are not too diminished. 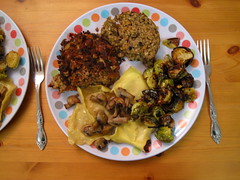 Thanksgiving was brief – D. came home from a late walk from work to a house with windows fogged from boiling, cooking, steaming, and baking (beige) things. (All comfort food is either brown or beige. It’s amazing how that works.) T. had roasted Brussels sprouts with garlic and herbs – which we’ve discovered that we really like – baked our traditional Thanksgiving haggis (well, as traditional as a faux haggis can get), pan-seared mushrooms and butternut ravioli (cheating – D. didn’t make the pasta this time), and finally, quinoa-stuffed eggplant, quite loosely based on a Michael Chiarello recipe she saw years ago.

If none of this sounds like Thanksgiving food, this is because neither of us could face mashed potatoes – T. didn’t feel like attempting to make a turkey, and we’re saving our cranberries for later in the winter when we’re really craving home foods. We’re stockpiling butternut squash, pumpkin, candy canes and cranberries against that day…

The real culinary star this meal was the dessert – carrot maple pie. The photograph didn’t do it justice at all, so we tossed it. T’s going to make it another one, and finish roughing out a reliable recipe, but we were surprised by how well carrots take the flavor of almond and vanilla, and though the pie filling, sweetened with a liquid and made of carrots boiled and mashed, tended toward a bit of excess in the liquid category, T. plans next time to roast them. Stay tuned for a really inexpensive and tasty and even semi-healthy dessert option.

This past weekend, our chorus had a contract to sing a few Christmas carols at An Unnamed Garden Center, just south of Edinburgh. We were supposed to sing for awhile, step outside to sing a song for the tree-lighting thing, sing for a bit more in-store, and then go home. Is anybody surprised that it didn’t work out quite that way?

Indoors, we piled three deep in a dim aisle, squinting at our music (as our director squinted at his pitch pipe) and through interminable garbled store announcements (Behold, beef burgers and hot-dogs available outside at the bus! Find your places now for the tree lighting, oh, ye hapless consumers!) tried gamely to sing about the birth of Christ. A few people applauded, one woman stood in the aisle and wept, small children tried to imitate our director, but most folk looked stunned or seemed dismayed that there were twenty people harmonizing in the tree aisle as they compared prices on plastic icicles and fiber optic light show trees.

And then, we had to go outside.

Turn your sound down – the above video is of the skirling of Santa’s pipe-band, as the fireworks went off. If you’ll note, the Christmas tree itself is … swaying, a bit. This is because we had wiiiiinds this past weekend; gusts of up to 70 mph. Of course that’s the time you want to be outside with your mouth open. This snippet shows the grand finale of the tree lighting, by this time we’d been standing outside for about 45 minutes, were freezing (the girls frantically dancing to keep their blood moving), and just wanted to be done.

Well, we gave it our best, for a few hours (and in the face of £15 in cab fare plus £18 in train fare, tried to make sure the experience gave us value for the money), only to be dropped off back at the train station in Edinburgh … where there were Mysterious Goings On. On the board we saw that our train had been canceled for lack of personnel. While we pondered what that could mean, we waited around for nearly 2 hours for ScotRail to organize a coach. (Did we mention that it was freezing? And that the drunk man standing behind T. complained bitterly about the lack of toilets on buses, and then proceeded to relieve himself on the wall behind her???) We were freezing and cranky by the time we were taken by bus back to Stirling, arriving home at 8:30 – three and a half hours after we’d finished singing. 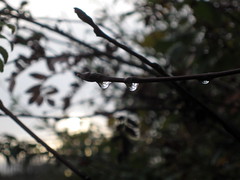 Yesterday, the city stopped — under a general strike, so we finally figured out that many of the missing personnel just decided to start the strike early. Meanwhile, yesterday, just to make sure that the city stayed stopped, we had a deluge. The train lines, some train stations, parts of the Big City, and many villages flooded. Thank goodness our wee Cambusbarron is all uphill! We’ll struggle to reach it once it snows (heck, we struggle to reach it now), but it’ll never flood… Ah, the cold season in Scotland. It does make one count one’s blessings.

And, since it ’tis the season, we’ll be heading out into the weather again in a few weeks to sing more Christmas carols (plus some truly awful pop songs, but we’ll not dwell upon those). Meanwhile, at the University, the semester winds down. Christmas vacation is in sixteen days (not that anyone is counting), and D. is looking forward to doing absolutely nothing for hours at a time. Before the end of the month, T., meanwhile, has still a few hundred books to read (truly) for the Cybils, and many plans to force D. into baking hand pies, making pasta, and his special chocolate pudding, while working her way through our friend Mr. B’s list of Underrated Movies. (Mr. B. is a screenwriter and knows of what he speaks.)

D’s viva looks to be scheduled for mid-January, so we’ll be shelling out the funds to extend the student visas, which will have the expected effect on travel, bank accounts, and shopping for this time of year. On one hand, we’ll continue living in limbo until we can determine where to jump next. On the other – as long as we have this house and both can get some work done, we’re not quite homeless. Lots to be thankful for, so we’re just not going to obsess over the things we can’t control. Which is everything.

One Reply to “A Pre-Marshmallow World”