Back when our blog was named “Wish I Were Baking,” and when we actually made an effort to focus on food and the occasional knitting project, we met a blogger by the name of Pille whose beautiful food blog was an inspiration – and also kind of terrifying, as she baked and cooked seemingly endlessly, plating up perfectly turned out dishes, photographed stunningly, nearly every day. Also, she hunted for wild mushrooms, gardened, picked berries, canned, made jams… you get the picture. We – Hobbits now – still know her, and are applauding from the blogosphere sidelines. This month, she’s on the cover Estonian version of “Family and Home” magazine! 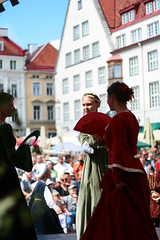 As mentioned, we met Pille through her blog and actually got the chance to meet her when we first got to Scotland, as she was finishing up the last details from her PhD here and we overlapped by a weekend. We met her again for lunch when we went to her lovely country, Estonia, for a work-related trip for D. We ate outdoors at a Russian restaurant, and enjoyed an unusual meal (still not sure how we feel about pickles and honey), surrounded by a historical festival in the ancient part of the city, with stunningly costumed dancers and singers. It was like Estonian Disneyland, seriously, only far better. Eventually, Estonia will figure into our travel plans again, and we’ll finally meet Pille’s adorable kids.

Since she’s published a cookbook, Pille has obviously been in print before. She was in the Estonian Marie Clare a while ago, listed as a successful chef and mother, and certainly her food has been included in magazine spreads all over, complete with her sharp photography, but she’s never been a cover girl until now.

Congratulations again, Pille & family! We can now say “we knew you when!”

One Reply to “Famous Friends”