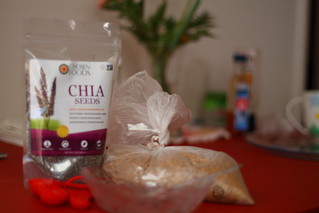 (Okay, this is the last time we’re going to mention the frog thing, but seriously. Pille’s distaste still makes us laugh.)

As we mentioned last post, people in need of lowering their carb intake for whatever reason generally find out that their days of buttery toast, hot cereal – granola – etc., are mostly over. Cereal grains and cereal itself can be a fairly high carb entry into the list of foods, and the fact that many of the “best” ones are sweetened… well. And, after our horrifying experience with TVP, we weren’t any too eager to repeat any strange breakfast substitutions, but because we are intrepid food explorers, we… couldn’t help ourselves. Everyone is still talking about how great chia is supposed to be, so…

Symptomatic of a wonky endocrine system is oddly high blood sugar in the morning — and a pre-breakfast morning run or, in our case, slow uphill slog can drive blood sugar into the stratosphere, and then plunge it right down, abruptly, into the basement. It’s one of those things that T’s endocrinologist just says happens – but it means that exercise can be a little more exciting than one expects, what with the sweating, dizziness, and shaking and all. A box of raisins eaten halfway through a hike really helps as does a breakfast with just enough carbohydrate to give you fuel, and just enough fiber to give your body something to work on long enough so you don’t pass out. Runner, writer, and blogger Carolyn Ketchum eats this mix of flax and chia before long runs, and finds it gets her energy to get all the way home for Second Breakfast. (Life should provide two breakfasts, shouldn’t it? Sounds good to us!) 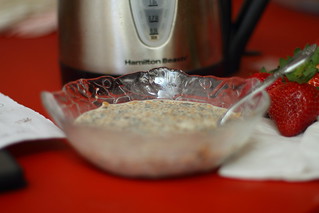 In a small bowl, stir together chia seed, flax seed meal, and sweetener. Add hot water, stir and let sit for 2-3 minutes. Please do time yourself, and DO NOT go unload the dishwasher, run out and water the plants, or talk to the neighbor; by the time you return, your cereal will have solidified. Stir in cream or butter, sprinkle with a little cinnamon, nut butter, berries, raisins, cracked pumpkin seeds…you name it (in the low carb food arena) you can add it.

Makes 1 serving, and, sans optional ingredients, contains a total of 18 g of carbohydrate and 18 g of fiber.

This was surprisingly tasty! T decided against grinding the chia this time, simply because she’s afraid of its gelling properties, and didn’t want to it to act on the flax and water before she was ready. (And, since she wandered off, it did that anyway, without being ground.) Despite our COMPLETE incredulity and expectation that it would be disgusting, we were happily disappointed. It was really good – crunchy and hot and tasty. We kept it vegan, using the So Delicious Coconut Creamer for our cream, and a sprinkle of the lovely King Arthur Vietnamese cinnamon (we got it as a gift from our friend K., and have become addicted) for flavor. Really filling and tasty, and perfect for a hot, sweet, nutty cereal … 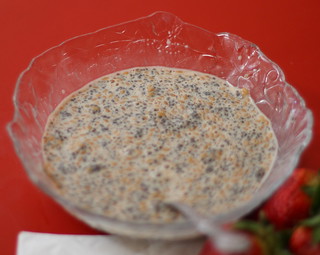 But, D. took it a step further. In his quest for polenta/grits, he took a tablespoon of chia seed, a tablespoon of cornmeal grits, three quarters of a cup of almond flour. Together with a two cups of water – one cold, the other, boiling hot and added while cooking – he boiled the heck out of this mixture and served it with a little salt, butter, eggs and sausage. The texture isn’t quite right yet – too much water made it weirdly fluffy, instead of the dense, slightly gritty, slightly gelatinous mix that is polenta/grits/Romanian Mămăligă, like we ate with our friend Axel, but we’re moving in the right direction. Progress! Until next time…

2 Replies to “C-Ch-Chi-Chia, or, Breakfast Without Frog Spawn”