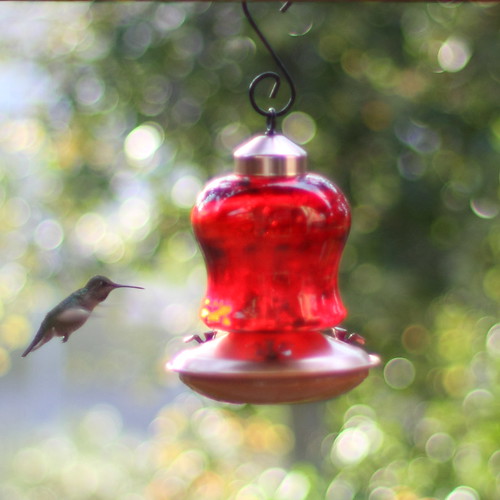 With apologies to e.e., around here, the world is not mud-luscious. It is buzzing, and if you go out the front door, the greedy, tiny, flying pigs will not whistle far and wee, but will divebomb your innocent head and make rude and aggressive “move along” noises at you.

Ah, well. Mud-lusciousness will revisit briefly at the end of the month, according to the long term forecast, as March is almost required to come in like a lion, and then calm the heck down. We’ll see. The last week of the month always throws us a weather curve ball this time of year (and, since Virginia got snow on St. Patrick’s Day, East Coast, we are feeling your pain. Metaphorically, at least.) Meanwhile, while we contemplate perfect sunshine, floods, or thunderstorms, we picked up some super-early strawberries because that chia is still calling us. (And thanks to all the people who have emailed to say they’re trying and liking this mix. It is really good, super quick, and opens itself up to many interpretations.) Imagining making a quick-set jam with it — all those lovely nutrients giving you an additional excuse to spoon it… a jam to which you don’t need to add extra sugar to make it gel… But first, T went off on another experimental tangent.

Our friend L., known to two very short, tiny, opinionated ladies now simply as “Poppy,” has tons of good stories about “back in the day.” We tend to enjoy those “back in the day” tales about food – our Uncle P., may his memory be a blessing, was full of those, and it led to many a happy Sunday recreating recipes from the 1940’s. Last weekend’s “back in the day” tale had to do with teacakes.

Teacakes (variation, “tea cakes”) are A Southern Thang, that is, one of those things which a.) originally didn’t have a recipe (no matter how Ms. P. Deen wants to tell it), and b.) was invented out of necessity – either scarcity, or some useful cause that has been lost to time. T’s father, once upon a time, used to make teacakes, and they were, unlike the sugar cookie varieties that one sees all over the web under the same name, rolled yellow cake, sometimes fragrant with vanilla, leavened with baking soda, and about the size and thickness of a halved English muffin. They were sweet, with a slightly soda-tang, and the tops would sometimes slightly brown and dimple. 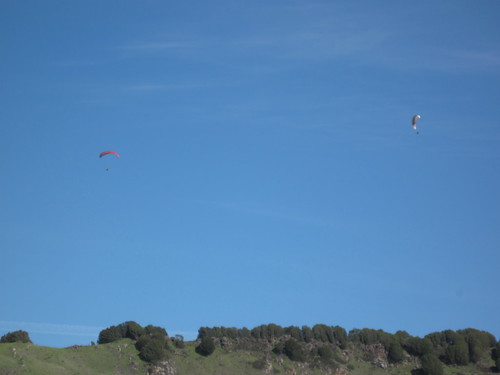 T’s father usually made these beauties annually on the 12th of Never, so T. can only recall having them once or twice in her childhood, despite begging … and now, after years of nudges and suggestions for her father to recreate the dish, he can’t remember the recipe. Oh, the wailing! (T. feels it important to point out that she believes his coyness to produce the Super Seekret recipe all those years has returned karmically to bite him in the backside.) Fortunately, there are other less coy members of his generation who do remember.

Though T’s father grew up in the panhandle of Florida, and Poppy was at least a part-time resident of Oklahoma, their variation on tea cakes are close to the same. Poppy’s grandmother’s teacakes were really test cakes for her oven, which was wood-fired and probably didn’t really heat evenly until it got going. She took cake batter – yellow cake batter – and made small, palm-sized test cakes, which an adoring grandbaby was only too happy to test for her.

As others have said, variations abound in the teacake country, not to mention the world. Originally, teacakes were measured with tea cups – actual, bone-china tea cups. Many old recipes use those measurements, which is where our plain old “cup” measure originated. T opted against using her antique (mismatched and beloved) china for this! Of course, any teacake coming from The T&D Test Kitchen will be not “authentic” Southern at all, despite D. having been born and living for ten minutes Murfreesboro as a teeny-tiny infant (apparently “Southern” doesn’t count if you can’t focus or speak). To add further to the “inauthenticity,” we introduced the abomination of chocolate chips!! But the teacakes themselves were tender and tasty and, piled with strawberries, a harbinger of things to come. 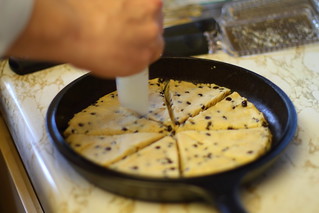 As always, begin by greasing your pan, and turning on the oven. You’ll need a sturdy spatula to blend your ingredients. This dough comes together like a shortbread and/or pie crust – the liquid is only there if you really, really need it – we didn’t, but it’s an option. It’s important to combine your dry ingredients – flours, gluten, salt, sweetener, cornstarch – before you add shortening, or it may combine unevenly. T. started with a spatula, but gave up in the end, and just used her hands. 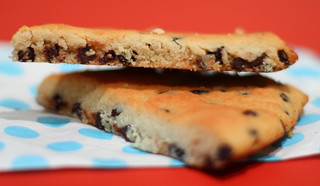 Add your chocolate chips LAST. We used Barry Callebaut’s Sugar Free 52% semisweet from King Arthur Flour, but it’s really easy to make your own sugar free chocolate morsels, and you SHOULD. These bad boys are expensive. Our only excuse at this point was a lack of time. You’ll also note we used chocolate extract. An extract of chocolate is made the same way vanilla extract is made – alcohol infused through cocoa beans. It’s got a fairly strong alcohol note, and it can be as overwhelming as too much vanilla – moreso, really. BE CAREFUL and MEASURE. Like liquid smoke, too much extract is not one of those things you can take back.

One of the great things about this is if you’re a chocolate chip cookie dough eater – there’s nothing in here you can’t eat raw. Don’t, though, because that’s gross. You can opt out of rolling this cake and bodge the whole thing in a cast iron skillet. Bake it for forty-five minutes, check its progress, and tack on another fifteen minutes, with checks at five minute intervals. You’ll want it a lovely golden brown, but don’t let it go too far! Note that D. wedged it into servings before baking. This really helps in the quest to get it out of the pan!

In case someone wants to argue with us and call these shortbread… Mmmm, okay. Chocolate chip shortbread, whatever. Traditional Scottish shortbread doesn’t contain baking powder, but you can call them what you want. The “cornflour” or cornstarch will help give the nut flour a velvety mouth feel and a richness typical for shortbread, but you can leave it out, if you choose, or substitute the same amount of rice flour, which is what commercial shortbread bakeries use. 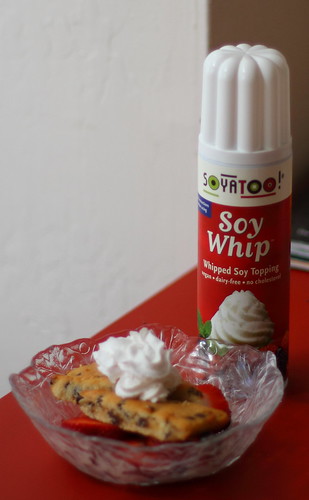 The important thing is to imagine how you’ll eat them.

P.S. – We tried that soy whipped cream, which we found at our Raley’s, on a whim – it’s vegan and though it contains sugar, it hadn’t got much. It’s not half bad at all.

One Reply to “[in just]/spring”