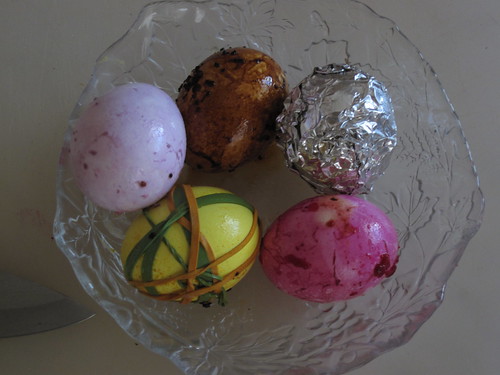 Just out of their hot soak in vinegar and vegetation.

A joyous greeting of the season to you – especially to our dearly beloved in the North, who may just now be getting the faintest hints of green fuzz on trees… We are today hefting pickaxe and hoe on the incredibly-ridiculously-oh-good-grief-REALLY!? hard clay soil of our garden space, covered, as it has been, with black plastic in someone’s SUPER-lame attempt to kill the stupid ivy. Yes. Well. It didn’t work.

At any rate, whilst we worked, T. had some experimental eggs soaking away in natural dye solutions. Pille explained how to do it with onion skins, but T. had forgotten that egg and skin need to be boiled together, and opted to simply do a hot vinegar bath. The rest of the ingredients she assembled were chopped red cabbage, chopped chicory root, turmeric, and, the perennial favorite, beets. 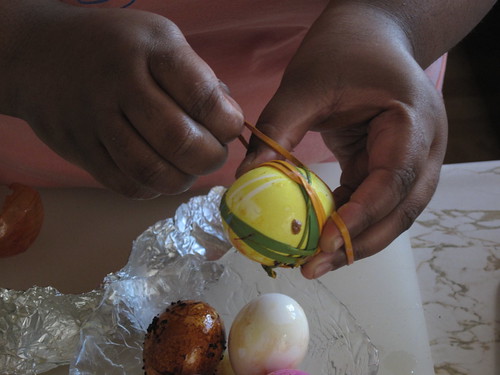 Interestingly, the colors changed as they dried.

Dyeing with natural dyes is tricky – not just because it’s messy (all dyeing is messy; fact, you live with it), but also because there’s the niggling suspicion that one is wasting food. If you can, plan ahead and save ends and bits of prepared veg for this project. Certainly start collecting the onion skins WELL in advance.

The chicory created an intense, deep brown, and because we used it chopped and buried the egg in it, the texture is very mottled. Turmeric is reliably yellow- butter yellow, from a quick bath, or a mustard shade, for longer exposure. T. impulsively dipped a scarf in the chicory/turmeric mix and the dye actually heat set. She was unsurprised, considering how hard it is to get curry stains out of shirts.

The chopped red cabbage is our favorite. Instead of producing a red, the delicate, robin’s egg blue is just gorgeous. We may try frozen blueberries another time, for a deeper blue. We have plans to try the onion skins again — and like their streaky/mottled browning effect. The beets are a reliable pink, as were our fingers.

We love the colors. We would (and will) dye boiled eggs with natural dyes for no particular reason except that they’re beautiful, for the rest of the season. After using natural shades, synthetic ones just aren’t really as visually appealing.

Today we found a nest of what we think were California Slender Salamanders beneath a rock under our lemon tree. We put them carefully back (they didn’t even want to stick around for pictures, they were completely freaked out) and just marveled at how alive our backyard is suddenly becoming, sans black plastic… unfortunately alive, in terms of the ginormous spiders invading, and the Norway rat we saw cruising around beneath the birdfeeder, (who might have found his way indoors, oy), but life is life, eh? 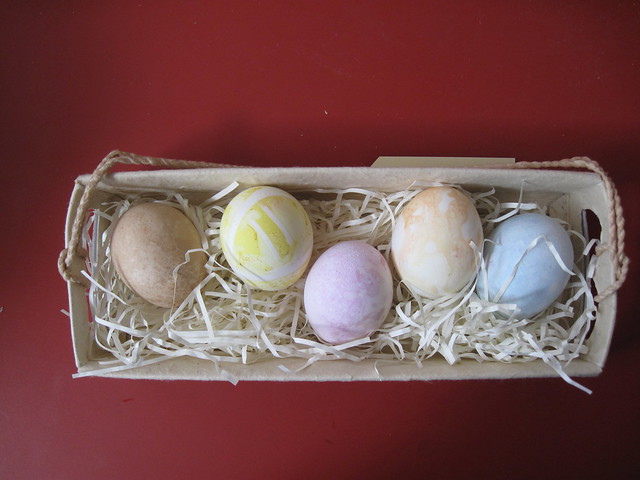 Exuberant, joyous rebirth to you.