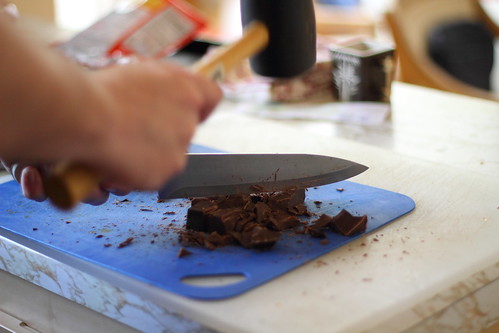 …well, they were supposed to be raspberry chocolate chips. Somehow, they never got to the “chipped” stage. They were nibbled and tasted and outright hoarded, and then, they disappeared into rich, chocolate cookies – there was no “chip” about them. But, they started out life as a ginormous hunk of baking chocolate.

We’ve always tried to eat seasonally, which for us means not splurging and buying strawberries or tomatoes or whatnot in the middle of winter. When a season is over, it’s over — there’s not much sense buying something which is three times as expensive as usual and tastes horrible anyway. There’s always frozen and canned stuff to fall back on, especially with things like berries. T stocked up on frozen, but decided to see if she could do something with freeze dried. Honeyville claims that their freeze dried fruit, hydrated, tastes fresh. Not to do a commercial, but it’s surprisingly close, and these were on sale. T. decided to experiment. (As usual.) 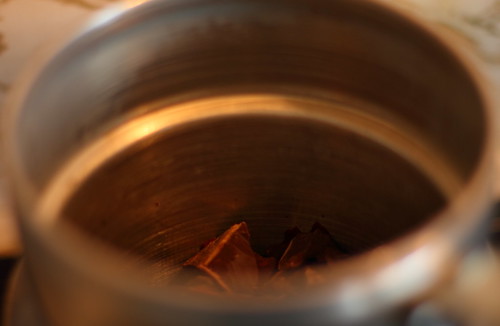 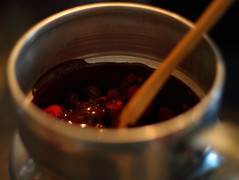 We used our lovely 1940’s double-boiler – and this thing heats up FAST. As soon as the water boils in the lower pot, be wary. These aluminum double boilers have to be taken off of the heat almost IMMEDIATELY, or your chocolate will seize. Word to the wise there!

After adding a third cup of sweetener and some very hasty stirring, our chocolate forgave us for being too warm, and got glossy and pretty – so we dumped in a load of very dry and crunchy, freeze dried fruit. And it confused the chocolate entirely. T. stirred and stirred the mixture, and then we dumped it out to set.

And, it wouldn’t set.

And, it wouldn’t set.

And, even an hour later, it wasn’t even remotely firming up, and T. threw up her hands and said, “So, you think I could just stir this into cookie dough, and it’d be all right?” 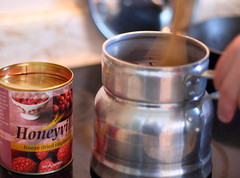 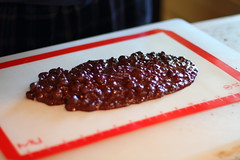 And, then, she wandered off to bed, and forgot she’d set it on the dining room table, until the following morning after breakfast… when she went in to put it away…

And it was solid. Lumpy, and not really as well-tempered and shiny and good-looking as store-bought chocolate, but it was done. The flavor was semi-sweet, and the raspberries added a sharp, tart-sweet and tasty note.

They never ended up being used for their original purpose, but it was a good reminder of how easy it is to make one’s own chocolate bars… you can control everything going in – how sweet it is, if it has peppercorns, nuts, or coconut flakes, if it’s got coconut milk, dairy cream, or no milk at all… sometimes, it’s just a lot easier to do it yourself. Meanwhile, we’ll be looking for what other trouble we can get into…

One Reply to “Raspberry chocolate chips”