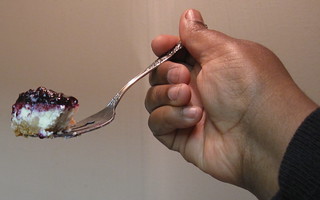 Can you bake a cheesecake without cream cheese? T. asked the internets at large on a Wednesday afternoon. She was treated to dubious silences and a chorus of “NO” by well-meaning strangers when she perused the goods in her fridge and found a log of Laura Chenel chèvre – a mild and fresh Sonoma goat cheese. “It’s too bossy,” she was warned. “Too much flavor.” That’s as may be, but when you’re stuck on a writing project and have been cooking just because a.) you’re cold and cross, and b.) you’re craving an excuse to eat blueberries, and c.) did we mention cross? you just… go ahead and make that thing. Because, cheesecake. Sometimes life is less about if you could do a thing, than if you should…

Normal people have… food on hand, in the house, and don’t need to make lightning raids on the pantry to create things out of odds and ends, but somehow, the end of the week always brings us to this weird pass. Maybe it’s just that we haven’t yet gotten into the habit of doing “big shops” for more than a few days at a time, a relic of our time in the UK when we went to the tiny market up the road daily. Maybe it’s just that we rarely have desserts that we make for ourselves (though D. frequently makes ginormous cakes and …carries them off to work) and we don’t think to have ingredients on hand. Maybe it’s just that SOMEONE is altogether too fond of cream cheese frosting for their ginormous work cakes. At any rate, T was determined to thaw some blueberries, and needed something to go with them. Enter the chèvre.

Possibly a traditional West Coast American cheesecake (sans eggs, unbaked) might not have worked out as well, but this was T’s usual kitchen sink veggie hybrid, which uses a box of Mori-Nu silken tofu to replace the additional protein and creaminess that eggs would have provided. A tablespoon of vanilla, together with half (4 oz. from an 8 oz. log) of a Laura Chenel chèvre cheese – no salt added, because chèvre is already salted – three tablespoons of castor sugar, and we were good to go. The ingredients she simply creamed together with a stick blender, and set aside. 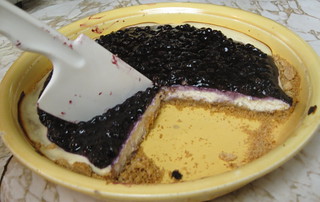 The unprepared chef traditionally never has digestive biscuits, gingersnaps, or anything else helpful — or homemade — but there’s always that stale packet of graham crackers she got for the nephews ages ago — they’ll do in a pinch for the crust. They won’t add much flavor, so freshly ground dried ginger and/or cinnamon to the dry crushed crackers is essential. One and a half cups of blueberry mixed with a half tablespoon of King Arthur Flour dried lemon juice, two tablespoons of sugar and 3/4 tablespoon of cornstarch was stirred to a thickening boil, and set aside for later… and then T put it together, baked it – sans water bath, just in a plain oven at 170°C/350°F for thirty-five minutes until the middle still jiggled but there were signs of tightening all around the edges.

T could hardly wait for the stuff to cool. Enquiring minds now wanted to know if it was any good… and it was! The slight tangyness provided by sour cream in many cheesecake recipes for more prepared chefs is provided by the chèvre. We actually wish we had used more than half the container; the Chenel is such a mild cheese and not so assertive that we couldn’t have used more of that piquancy (conversely, we could maybe have gotten the same effect with a tablespoon less of sugar – we’ll have to fiddle with it). Maybe we’re just on a late autumn citrus kick, but T. really wished she’d added more lemon in the form of zest to the berry topping, which she added to the room-temperature cooled pie. Next time. Next time.

Until then, here’s to finding random things in the cupboards and the fridge and beating them into culinary submission.