So, we’ve been making our way through our supply of dried and drying peppers, trying to knit them into something suitable for storage … and also something decorative, if we’re going to have them sitting around. Shown to the left is the first bundle – of what we had thought to be Thai Bird chiles, but about half of which seem to have a miraculous lack of heat. We’re probably going to end up saving these as simply decorative … or giving them away as such. It’s sad, really, because we know that one of the two plants was Thai Bird – we tasted the peppers, and they were truly magnificent in their heat. The other, though? Completely decorative and devoid of heat. I’m hoping that one of the two bunches is the Thai Bird and the other is the decorative, because of the differences in color and in ripening speed. We’ll see.

Next up are our Bolivian Rainbow Peppers. There’s no doubt that these babies are hot – painfully so, and of a type of pain which comes back to get you especially cruelly if you try to brush your tongue to take away the pain.

We’re going to let them dry, to see what they’re like that way. Shown to the left are the ripe specimens, and to the right are the immature fruit. They start out life purple and progress through a cream into a yellow and then red. The red ones seem to be holding up to the drying process better than the purple, which are wizening into almost pea-sized little black nubbins. The reds are keeping their shape, and not wrinkling.

Everyone should have a good, white wall in the house, upon which to hang their herbs (and fruits). 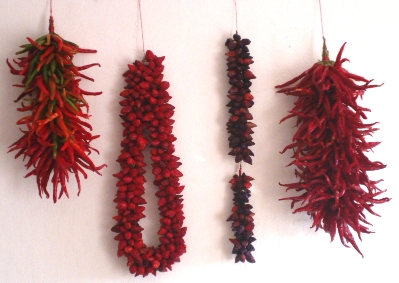 Here’re the lot of them, hanging in an out of the way area to dry. They will probably not be joined by the remaining peppers, which will go into the cuisinart to hopefully provide some flavor for the winter. We’ll see.