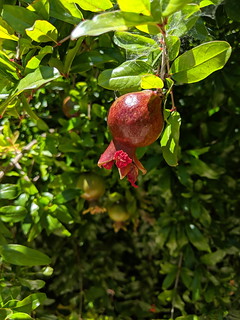 The last week we’ve been hearing… drums, and occasionally the theme from Spider Man played in the hot afternoons. Rather than aural hallucinations, it turns out that we are now experiencing … the golden splendor of having a high school around the corner, an elementary school around the block, and a junior high school two streets away. It is MADNESS in the morning; we opened the garage to find four cars in some bizarre U-turn situation in front of our driveway, and a line of cars piled up at the stop sign. We can only look forward to more of these delightful shenanigans. We’re also going to have to walk a lot earlier in the morning, or at least a lot later, once first period has started, otherwise the sidewalks are rather …full.

It’s so strange to live deep in suburbia with so. many. kids around. We expect to be asked to buy …just about everything, and to support various booster clubs. Or, maybe that was from some 1950’s TV show, and no one does that anymore. (You can tell some of us didn’t go to public school.) 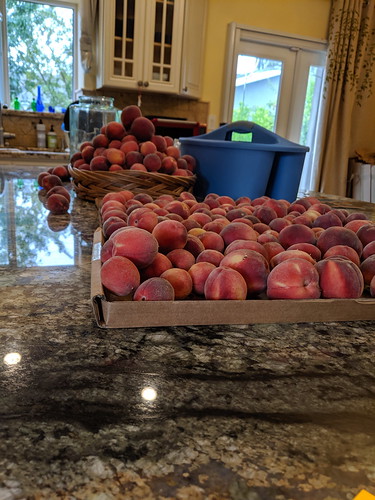 Late summer means that we’re finally beginning to see the big harvests happen for our lovely tomatoes and peaches. We have only three tomato plants and they are all for some varietal or other of plum tomato, so we have VERY many, and they are low acid and tasty. The number of peaches we’ve harvested, even with fighting the squirrel for them, is very exciting! The plan is to make peach preserves, and maybe a fresh peach chutney, though we don’t know what we’d do with it after we made it. Grilled peaches may also be on the menu. Our peaches don’t… look ripe, but they are small and firm and surprisingly delicious. We think they might dry well for chewy goodness later in the year, but we’ll have to see how many survive our eating them out of hand — and the privations of our family, ahem.

Though the pomegranates are getting bigger every day (and the tree encroaches further and further into the space that should be the lemon tree’s next to it, poor thing) we expect the jujubes to come ripe next. We actually tasted one of the fruit which had dried on the tree, and were surprised – SoCal aficionados who have frequented I-10 know about Hadley’s Fruit Orchard in Cabazon, where there’s a Costco sized warehouse full of dried fruit products, and you can get date shakes… well, sun-dried jujubes apparently taste like date shakes, according to D. T, who hadn’t been a fan when introduced to them, just thinks it tastes like …a date, and since one of its nicknames is the Chinese Red Date, that makes sense. 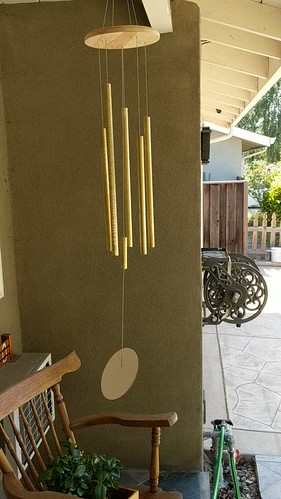 This has been the Summer of The Project. T painted multiple Adoption Day t-shirts for her sibs and niece as they celebrated their adoptions, and D surprised T with a hand-made brass wind chime – she was mainly surprised because who knew you could just make those with enough time and a saw? It sounds lovely – do click on the image to hear it.

D’s latest project is leather working. D is making T a barrel purse, which necessitated a trip to Tandy Leather… a store she hadn’t been into since she worked at summer camp. We will not be making any badly stitched moccasins or dreadful tooled leather wallets, however. T is intrigued by this new and creative streak, and wonders what else she can get out of D while he’s in a maker mood. Perhaps shoes? A footstool?

Other random meandering: One of the dubious gifts of social media is the realization that so many of the people with whom you are acquainted or know/like/follow also know/like/follow other people with whom you are acquainted. In the last (endless) election cycle, there was much talk of “bubbles” and intellectual filter theory, and while not all of us put much stock into it, it is apparent sometimes that types of people tend to stick with types. Or, as they said in Ye Olden Days, birds of a feather flock together, water finds its own level, like attracts like – please, Choose Your Own Ancient Saying. What’s weird is the near hostility which sometimes accompanies this …grouping. Having grown up in a conservative faith, this level of angst is unfortunately familiar… some of us got “It’s Us Against Them” preached to us from the pulpit weekly. Others of us learned to distrust the more obvious groupings at our mother’s knee, and it’s been easy for many people to get their backs up if others vary in looks, faith, social status or belief … just check your Twitter or Facebook feeds. 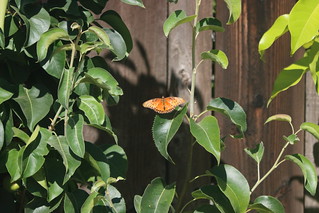 The human brain likes patterns, and it’s always striving to make sense of things. Like a sheepdog, endlessly herding things, our brain says “Look! One of these things is not like the others!” when we find differences. That “Look!” is at first just knowledge, acknowledgement, but for so many people it goes straight into fear… and since many of us would rather eat nails than admit to fear, we substitute anger. We become hostile.

(Some of you are bristling, saying, “Well I don’t.” Okay. The “we” is general, of course, but this might go a ways toward explaining some of what drives public attitudes on social media these days…)

And what we decide to do, think, or say next we can’t blame on the way our brains work. We are not all alike. We would be bored if we were. So, why can’t humanity seem to get over the idea that societal differences and divergent opinions exist?

The local paper lists each week what one is meant to be doing in the garden, and now is the time to be raking up fallen fruit, pruning apricots (apparently before it gets wet and they get some sort of fungus, though this presents the question and why not the plums, too?) and… raiding the plant clearance bins at Lowes. August, September, and October are fine times to check and see what’s there – perennials with the flowers fallen, annuals that look a bit wilted, succulents that aren’t flowering anymore. T’s parents’ front yard is the recipient of the generous variety of lovely and colorful plants to be found in the half-dead-from-summer clearance bins. One must merely be sharp-eyed and patient, and one can coax all sorts of goodies back to life. T, who worked in downtown Walnut Creek, ended up with a bunch of landscape plants one day because she asked the workers why they were tearing them out. No reason, except that someone decided it was time for new ones… patience isn’t valued in commercial landscaping, but if you’re quick, you can take advantage of that. Happy hunting!