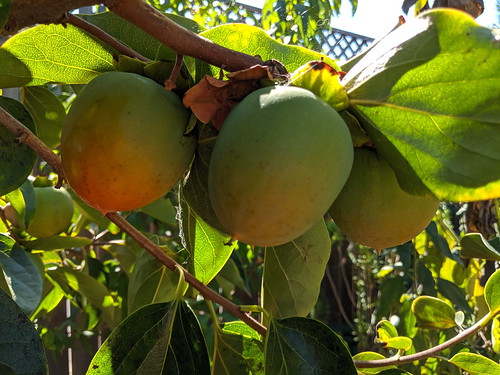 Long have I known a glory in it all,
But never knew I this;
Here such a passion is
As stretcheth me apart, – Lord, I do fear
Thou’st made the world too beautiful this year;
My soul is all but out of me, – let fall
No burning leaf; prithee, let no bird call. 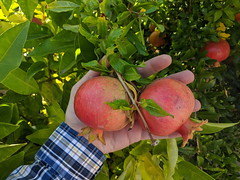 The above image could be entitled, “Waiting”. D is out in the yard multiple times a day checking the color of the persimmons, probably speaking gently to the tree, caressing the leaves. T, whose affection for persimmons is tempered solely by their somewhat slimy texture (they’re excellent dried, and somewhat of a challenge fresh to those who hated bananas as children) is waiting instead for the pomegranates, which she plans to share with as few people as possible. D has reminded her that she was deeply annoyed with her own father who also hoards his poms (the man has TWO TREES, could he not just share??? SHEESH!!!), and that she will probably explode from eating them alone, but so far this has not dissuaded her. Much. She is, however, researching pom jelly recipes, and has been promised one for pom molasses (but what does one do with it? Waffles?)… Autumn is definitely hopping, so stay tuned… 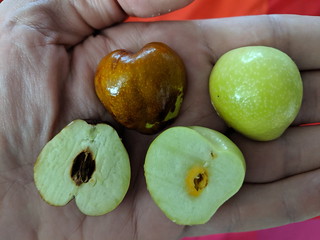 Meanwhile, the apples are down from the tree, there have been many, dried, sauced, and frozen, and the jujubes have been picked, dried, and candied, which has in itself been an education.

If you didn’t know, the jujbe, also known as the Chinese red date, was used in jujube candies back in Ye Olden Days. Much like horehounds, the old-fashioned hard candy that started life as a throat lozenge (or throat sweet, as the British call them), they contained the medicinal juice of the jujube, which apparently is still used in Eastern medicine for a congested chest. Though jujubes the candy are now made only of sugar and filling-extracting gelatin, back in the day, they were medicinal, so jujubes are apparently good for you. When fully brown and ripe, they are crisp and sweet-tart like tiny apples. When fully dried, they are, indeed, datelike. (Datesque?) We dried ours a bit more in a dehydrator and then boiled them in simple syrup for ten minutes to preserve them the Chinese way. Our landlord, Sheng, tells us they’re a hard-to-find delicacy. Jujubes, we discovered, have a secondary function… even when fresh, for some people, they’re a lot like prunes.

As to how we discovered this, there we will draw a veil… *cough* 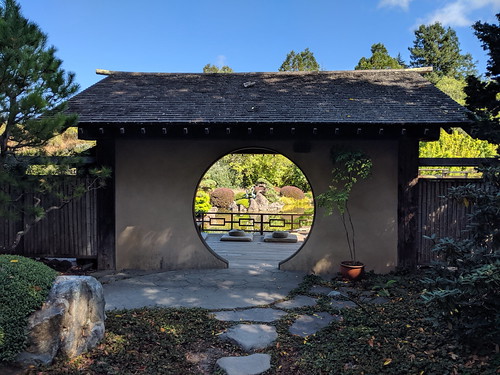 D’s birthday this year necessitated a trip to the North Bay and a visit to the far North Bay to find a spa we’d long heard of but had never visited. We had cedar baths at Osmosis Spa. Cedar baths are a therapeutic treatment consisting of twenty minutes of being buried from the chin down in gently steaming, heatedly fermenting cedar sawdust and rice hulls. It is… moist, steamy, weighty, and fragrant, and described to us like a “slightly damp weighted blanket. As the body absorbs the natural heat, it can be pretty darned claustrophobic for SOME, while others can get their Zen on pretty easily. We will leave you to image who in this family was flailing and trying to dig out their limbs and escape, and who was peacefully meditating and not flinching every time the nice lady laid icy cold cloths on their head. Ahem. We enjoyed walking the acreage surrounding the spa – it’s a beautiful, unexpected Japanese garden in the midst of redwoods and windy roads. We got a lovely massage afterwards – well, somewhat lovely, given that even after a shower we were discovering ground cedar in unexpected places – but the spa was one of those Experiences that you’re glad you’ve had, if only so that you can agree never to have them again… and that, in part, is one of the best things about celebrating another year. So, um, here’s to experiences…?! And another successful trip around the sun. 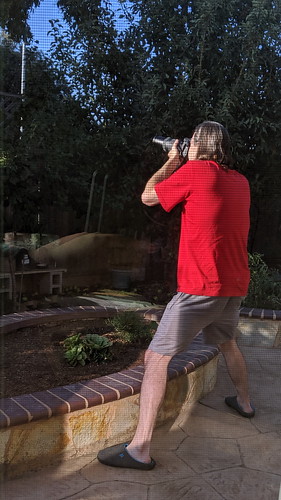 Due to the wonderfully ripening fruit in the yard – poms next, and then one of the orange trees is ripening nicely – we have become somewhat of a visitor center for the avian population and it’s …literally wild. The birds are taking over. We have four doves who are regulars, a raft of what we think are Hutton’s Vireos – they’re slightly greenish – at least one regular phoebe, if not two, a robin with his harem, Hrafen, Bran, and Morrigan, of course (as well as a scruffy interloper who turns up occasionally just to start fights), and then this loud scrub jay who recently decided he’s boss of the fountain… not to mention the hummingbirds who are convinced they own both yards and the house. There’s all kinds of shrieking and upset if you go into the backyard – which we must daily. This house is old, with the old-school carriage house type of thing – a disconnected garage which provides extra storage, laundry, deep freeze, and, of course, the car. Every time we go anywhere, it’s full-on avian hysteria and flustered feathers. T has determined that all of this is D’s fault, as he feeds the darned things and encouraged them to think that he had nothing better to do than to sit very still and try to photograph them. We’re waiting for them to become accustomed to us living here, too. So far, we think winter will arrive first… 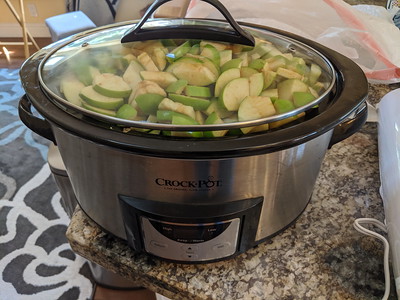 The choir year is now in full swing, and we’re near to the halfway point of rehearsing for our first formal concert. We had the entertaining – and very early morning joy of singing outdoors for a HERS walk to kick off National Breast Cancer Month. (There is nothing like singing and hitting high notes at EIGHT A.M. – while next to a lake and hoping not to inhale the wildlife.) Our choir got an arts grant from the state of California for sponsoring a free choir for people who don’t think they can sing, and we were tickled to be with them for their debut – where they did, in fact, sing. The cancer walk folk had no idea they thought they were frauds. Currently in our chamber group, we’re wrestling with Spanish – well, one of us is – and syncopation for our holiday concert. We’re doing a 1964 cantata called Navidad Nuestra, and it’s a hoot – lots of guitars and flutes and drums and dance-y tunes. And alpaca, incidentally. Not often you run across those in music, but the piece is from Argentina, and our entire concert is in Spanish. It’s given T a good kick in the bum and really heightened her Spanish language lessons – it’s not doing anything for her Dutch, but she’s hanging in with both.

D started voice lessons last March in a desultory fashion, but has turned from a good singer into a great one, and has added more than an octave to his tenor range, much to his voice coach’s shock (and the continued bemusement of the choir director, who doesn’t worry so much about having only one first tenor now). D himself seems somewhat abashed, but T is amused, because she had been telling him to take voice for years, and her silent, “I told you so,” is frankly not all that silent. In an attempt to distract himself from illness last winter, D picked up the lessons just for fun, but now he calls them a “little puddle of happiness” he carries with him, and is often humming or singing under his breath, like the rest of us choir nerds. 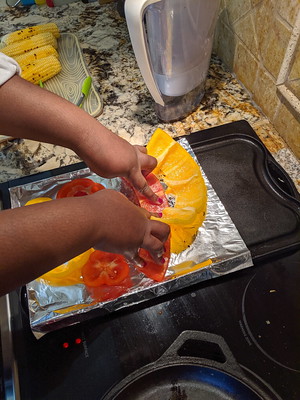 We’re grateful, as ever, for the things which make us happy — and while there’s a lot of ups and down, as there always are with mental challenges, and a lot of times we wish it was all done and wrapped up, life’s not like that, and… we’re okay. T is a bit cranky because she’s been off of her Prednisone for a whole four months, due to surgery… but symptoms are increasing and so playtime is over, and soon the return of The Devil’s Drug will make her even more of a mental case than usual. It’s a bit concerning when one spouse is on mood altering drugs and the other is bipolar, but at least we’ll be fun at parties! Hah, no, in all seriousness (despite fairly sporadic church attendance lately), we’re keeping the faith: nothing is insurmountable and all things are possible. As the days clip shorter and the blue skies grow more brilliant in the chilly breezes, we hope you and yours are well, and that you’re baking and cooking up a storm. Take the time to tell the people around you how much they mean to you — every day, with every crack in our social contract, we are reminded that things in this world change so fast, but you can live without regrets if those who matter know you love them.