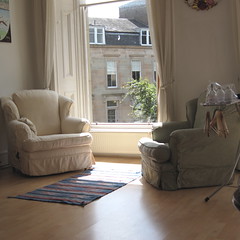 Hard to believe that it is November already. Since it rained so much of August and September it seems to have made the summer shorter than it was. The last of the gorgeous autumn leaves are being shaken and dragged from the trees, and we’re making desperate treks into the park to see the last glimpses of color before it all ends in muddy streets and dimness.

Speaking of color: in the process of switching our blog server, we found a fragment of an old post from August, once again sitting around and waiting for T’s obsessive need to find the right pictures. Here it is:

The other day, one of D.’s friends brought us some armchairs he’d had sitting in the basement. We’re happy to say that we now have some furniture in the place – but with the plain white walls, the creaminess of the upholstery is just a bit too much vanilla plain. Our immediate plans are to dye the covers: one orange, one yellow, perhaps. We’ll see. Maybe one red and one orange. 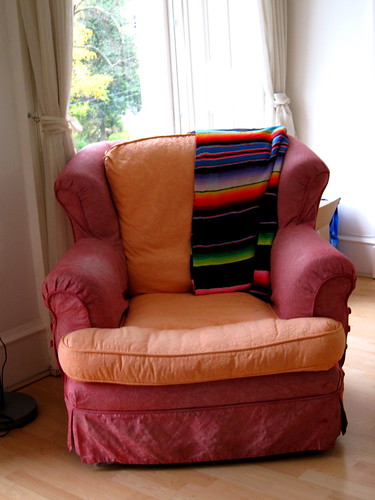 The shape of our lives, here, us such that we haven’t really worried about furniture. After all: nobody’s come to stay with us for over a year, and our local friends understand that we’re into sitting on the floor, on pillows. Well, that, plus we don’t really have people over that much. Which … is probably because we haven’t bothered to furnish the place.

By Christmas we plan to have everything settled, and to have the guest space (somewhat) cleared. Maybe we’ll get a couch or something. … because, really: we’ve been in this flat for 3 months, and it’s getting harder to pretend to still be “moving in.”

Fast Forward to Present Day: It’s been a lot longer than three months, there’s still no couch, but the guest room is mostly dug out. It’s hard to believe just how many things you can find to give away and Freecycle when you think you’ve given it all. Moving away from this auld Isle is going to be a snap, compared to how much freight and packing it took to get here. We a.) can’t take anything electrical (unless we’re moving someplace else in Europe, and that’s probably not happening) b.) aren’t taking our desks, c.) the Scottish Lemon’s already called dibs on our chairs, and d.) we can buy the exact same bookshelves at That Swedish Place in whatever state or country we’re in. We’ll roll up our rugs, fold our clothes, and that’ll be that. 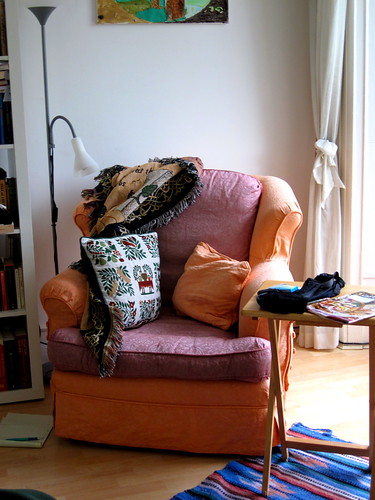 Meanwhile, it’s too soon to think about leaving, as D’s education isn’t officially over for another two years — though with his determination and endless tweaking of his PhD project, T. puts the time at more around eighteen months. Meanwhile, there’s a lot left to do with the bits of the house we have now. T’s compiling books and plants …and more dye.

It’s a lot harder to dye things than one might think. One one hand, our mini-hardware store down the street — almost the exact size and width of our upstairs hallway back in California — has everything, and dyes in all shades. On the other and, our knowledge of dyeing in a small, front-loading washer was not exactly, er, vast. We expected deep shades when we dyed these chairs — and kind of got pastels. The colors give them a kind of lived-in, shabby, loved look, but they’re not the electric shades T. had envisioned.

Part of the problem is that we probably should have used twice as much dye for each of the applications. But, in a small washer that recycles water efficiently, we weren’t sure just how much intensity the dye would have. This was only our first foray into the world of upholstery dyeing; we figure next time will be much, much more successful. (More excuses to find a couch?)

Now, if only we could get those drapes down and dye them…