The Spicy Tofu Salad we saw the other night on “A Lyon in the Kitchen” was part of an episode in which the host, a Nathan Lyon, visited a restaurant which made its own tofu.

Man, talk about jealous (and no, not of the gleaming-pated host, but the happy man in his restaurant)! The tofu-maker had obviously had a few moments with a welder’s torch. His hand-crafted machine ground soybeans and spat out okara in one direction, and soy milk in the other, and came with big pans for draining out milk and pressing tofu curds. He used food grade calcium sulfate (gypsum), which we haven’t yet tried, and came up with a really small curd, out of which he had far less liquid to press. Apparently calcium sulfate creates a more ideal flavor in tofu as well – which will go well with our next experiments, which may our dehydrated cherry tomatoes, leeks, fresh basil and thyme, or might include making a sweet tofu studded with dried fruits and Moroccan spices! A big potential “Mmmm!”

Since our efforts have been so tasty thus far, we’ve been fiddling with the idea of getting a soymilk maker, and went so far as to wander around our local Asian supermarket to see what we could find. It was instructive, as always — candied jackfruits, fresh lychees, packaged papadums and unidentifiable (well, to me, anyway) silvery fish swimming in large tanks made shopping much like a sort of culinary field trip — but sadly, no tofu makers, just lots of rice cookers, which we already have. (No trip to the Asian market is wasted, however; we were well entertained and came home with sacks of soybeans and sticks of agar, which is dried seaweed, and which is useful in making things gel hot, so it makes soups and gravies velvety without added starch or fat.) We considered borrowing my mother’s soymilk maker, but when we dropped by (she wasn’t home), it was spread across her kitchen counter (So is it broken already, Mom? Or are you cleaning it?). It’s called a ‘soy toy’ or something, anyway, which we weren’t too sure of (Toy!? Tofu is serious, people!) so we’ve been looking and wondering how worthwhile it would be to cobble together something of our own. 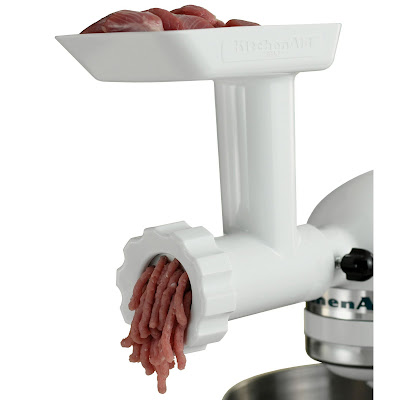 Today our deliberations concluded in a draw: no soy milk maker for now, but — we’ve decided that we’re going to get …a sausage attachment to the KitchenAid. Yes, I know. Weird. But here’s the thing: the soybeans have to be soaked and ground, and what better for that than a sausage grinder/food grinder? That way we’ll save what’s left of the poor blender engine before we burn it out completely. With a finer ground bean-mass, the okara will be easier to sieve out, and more of the flavor and richness in the milk will be left. Next, we’re in the process of finding or making a metal tofu press of our own, so the whole undignified tower of cans will be a thing of the past (Um, maybe. We’ll see…). It seems to be just a metal pan with holes in it, inside a larger metal pan topped by a metal lid… it just doesn’t seem that hard to make a decent press for a larger scale operation.

It does look like we’re going to need to order food-grade calcium sulfate. I find myself oddly not eager to hop down the street to Ace for gardening gypsum for my tofu (although I seem to have no issues with going to the drugstore for Epsom salts? Maybe it’s a hardware store stigma. Such sad prejudices!). We’ll lay in a supply of muslin cloth, and voilà – we’ll be in business.

Hope springs eternal, anyway. Stay tuned for more random food adventures… As the weather is suddenly quite cool and breezy, someone’s spare time is being spent concocting scones and other things I shouldn’t be eating — but my attention is turning toward making apricot preserves with ginger and citrus, since another friend’s tree is just loaded, and they’re on vacation until August and don’t care what happens to the fruit. Also, experiments are afoot with the dried apricots and the lovely pounds of mustard seed – a spicy hot/sweet apricot mustard with champagne vinegar – lovely tasting, we hope! Stay tuned!

One Reply to “DIY Tofu Continues”