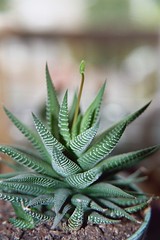 This dear little plant has been with us now for about six years, and is finally feeling well enough that it’s giving us some flowers! We picked it up in a pot containing less than one teaspoon of dirt … and a substantial amount of glue! It was one of those pots with a suction cup on it, and was meant to be stuck to the refrigerator or something. As if living things should be refrigerator baubles! 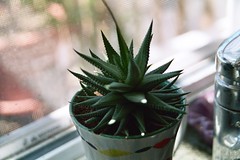 So, we took it from its pot – a feat involving a knife, much coaxing, and a pair of scissors with which to extract the roots – and repotted it. It lived in a little mustard pot for a few years, and grew larger, until we finally gave it its current home … in a coffee mug which had developed a crack.

It’s been happily living in the coffee mug, in various window sills, for several years now … and has been growing steadily all this time. It’s now about three inches across and three inches high.

We didn’t expect anything of it, and have simply been enjoying having a little plant which doesn’t seem to mind infrequent waterings or adverse conditions. So, when it began to develop a flower spike, we were excited!

So we waited. And waited. And waited some more. And finally gave up on anything happening, except for maybe thinking that we’d get a few seeds or something, because it was just taking sooo long for anything to happen. We were finally rewarded, though, with tiny little flowers which started off being light green, and now are … well, not light green. Don’t ask me what color they are, but I’m going to guess that they’re kind of pink. Sort of. Or off-white towards pink, at least. But with green stripes. 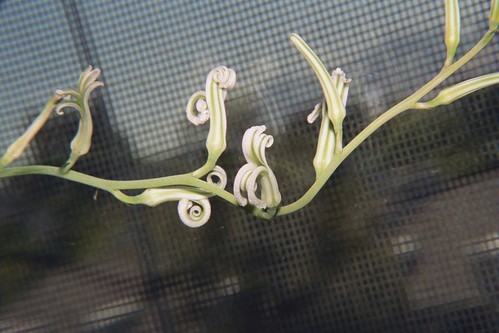