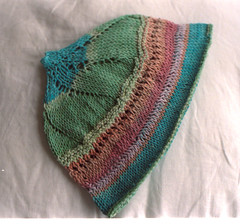 Posted (fortunately before the postal worker strike) back to the U.S. after having been carried cross country, worked on in over a dozen U.S. states and in two countries, I knit up this little hat to go along with the Baby Surprise Sweater. I’m told that it’s a wee bit large for the little fellow’s head, but that it’s certain he’ll grow into it, or at least his hair will fill it in somewhat. It’s, of course, knitted with no pre-written pattern, but I could tell you what went into it, if you were really interested. You can probably make out that there were some YO increases, a row or two of purl stitches, a row of K2TOG & KF&B, and somewhere down in there is a row of Herringbone. It was all simply “by ear,” and all the more fun because of it. 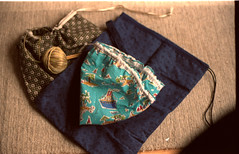 Shown to the right are several knitting project bags given to me by Jackie before we left. They are proving to be wonderful for carrying my current project to lectures (it’s hidden in there, but all you’re allowed to see is the bamboo yarn – yes, bamboo yarn!). Since the project is small as of yet, it’s currently living in the small, brown bag, but I suspect that it’ll graduate to the dark blue one in a few weeks. Thank you once again, Jackie!

Strangely enough, nobody has asked me about knitting during lectures. I’m wondering if it’s simply an acceptable thing, or if they chalk it up to my being a “crazy Californian.” We may never know, but I suspect that it’s possibly a little of both, along with, perhaps, a cultural resistance to asking someone crazy about what they’re doing. 🙂