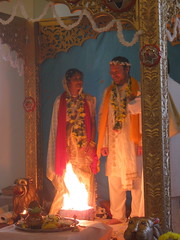 Another weekend, another wedding. Huzzah! Fortunately, we were merely guests at this shindig, which meant we enjoyed our time, and actually put down the camera! We only brought the small one, too, so that some of us would not be tempted to go the Unofficial Photographer route, *cough.* Chatting with friends over the scrumptious reception meal – an all vegetarian spread, for once! – gave us the comfortable feeling of being at a church potluck. Bemused, we went home to get out of our shiny, sequined outfits. (Well, some of us had sequins and gold beads and ribbons. The rest of us wore a dashing Bond-esque tux.)

It was a ceremony of “smells and bells,” as our friend C. put it – a lot of lovely incense, and bells, but we didn’t have quite the understanding of the service, although we had the program in English, and the priest – whose English was staggering under the weight of only six months in the UK – did his best to make sure we were all with him as he went along.

So, this was wedding #2 during which the couple participated in faith rituals that they did not believe or share. We couldn’t help but remark on the similarities to the last wedding. The couples both shared the same half-anxious, half-amused expressions, the same fumbling responses, the same bemused glances at the priest’s explanations. They endured a language they didn’t understand, and rituals they don’t profess, and why? T said it over dinner, “Well, these guys really love their parents…”

From the showers of flower petals to the ghee-drizzled fire to the incense and the rice tossing, it was an unique cultural experience. We were glad to be invited, and came away with plenty to consider. 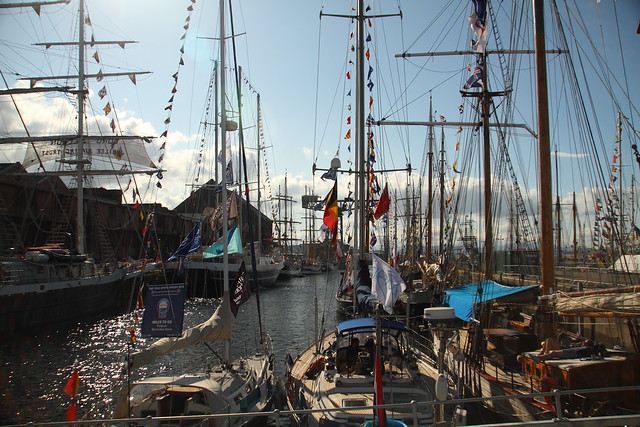 Post-wedding, a lovely long – sunny! – afternoon stretched before us, so we decided we wanted to go to the shore. This weekend was the midpoint of the Tallship Regatta, and we went with our friend C. out to Greenock to look at the tall ships. Many of the ships set out from Waterford, Ireland last Tuesday, and have been making their way to the Firth of Clyde for the races which were held all weekend long. With their sails furled, they weren’t as interesting to T., but D. and C. happily swanned through all 800,000 attendees (or so it seemed) to photograph every angle while T. quietly mutinied.

The waterfront was absolute madness with all of the people (and the bands, and the food vendors, and the craft fair and the midway and the food stalls). It was also a bit crazy to see all of the masts jumbled together, gathered from all over the world just for this weekend. From Americans to Australians to Norwegians to Russians, there were sailors on hand in uniforms of every stripe, massive peaked caps, the small bowl type, and somehow, every fifth pedestrian was either a pirate or a sea captain. All that was lacking were peg legs and parrots… 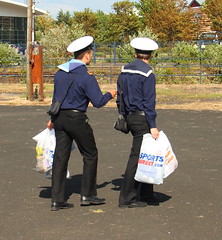 The clouds were piled high, like sculpted whipped cream, which meant that it was quite windy. Fortunately, although it was very sunny, and freckles popped up and skin bronzed, we never got overheated. Indeed, C. kept saying that it was “fresh,” which is apparently a euphemism for “freezing in the shade!” The color of the sky, the water, and just the general fairground atmosphere of flags whipping in the breeze was just lovely, though. We wish that we’d been able to see the ships sailing, but driving around through the countryside was itself a treat. Just to get away from the city seems to be something we’ve forgotten how to do! – To take a small break from the work and worry of wrapping up PhD studies and wondering where we’ll land next was just what we needed.

The PhD Thesis / Dissertation (if you’re in the UK it’s the former; in the US it’s the latter) has been sent to D’s supervisors for a final review prior to submission to the committee. Depending upon who’s counting, it’s either just over 66,000 words or just under 104,000 words … and it’s supposed to be between 70 and 100,000 words. Sigh. So to be within the letter of the rules, it’s either 1) expand the text by 4,000 words or 2) cut out an appendix. Here’s hoping that neither of those are the option and it’s accepted as is for submission!