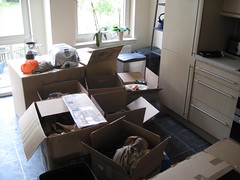 We’re settling into our new home. Our first impression: we’ve just had the best night’s sleep we’ve had in several years. Even though the house is in chaos, we’re still taking the time to relax, look out the windows, and enjoy the peace of not living in the middle of the city.

The kitchen is in disarray, so there won’t be much in the way of experimental cooking taking place until we can manage to pack up the dishes and tchotchkes which came with the house. Yes: this house came fully furnished … and apparently the owner has a penchant for decorating, because there are even spare decorations tucked away in drawers throughout the house. So, rather than simply unpacking, we’re doing a mix: unpacking our things and packing hers up to load into the garage. 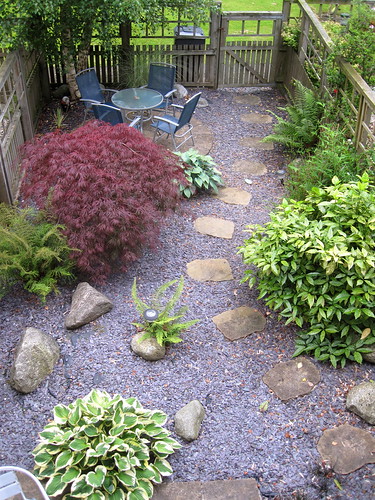 When we’re not tripping over boxes in the kitchen, though, we’re looking out at our garden … and realizing that we really do need to get organized so that we can have a few meals out there before the weather turns cold and mucky again. This morning the table was in full sun, but it was still too chilly to be out there without coats, which are packed somewhere still. We figure that the unpacking will take a few weeks. Hopefully we’ll get some use out of the space before Winter sets in.

Tomorrow morning we’ll be walking to D’s work – a walk of just under a mile, one way. Between our home and work is all residential, with a footbridge over the motorway. There are no shops, nor even any major roads to cross except for via that footbridge. It’s an amazing difference from where we’d been.

Cambusbarron itself has only five or six shops for the few thousand people who live here. We’ve gone to the opposite extreme from Glasgow: from a huge, sprawling, filthy city to a tiny village. We believe we’re seeing a better side of Scotland.

The sun is streaming into the living room, and we’re feeling lazy. The unpacking can wait awhile – there are books to read, and maybe even naps to be taken.