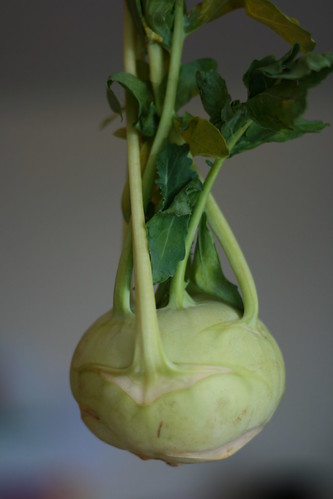 Branston is a well-known brand of savory foodstuff people here in the UK enjoy. They make what’s called Branston Pickle, which is pickled …stuff. The wisdom of Wikipedia™ assures me it’s “swede (rutabaga),carrots, onions, cauliflower and gherkins pickled in a sauce made from vinegar, tomato, apple and dates with spices such as mustard, coriander, garlic, cinnamon, pepper, cloves, nutmeg and cayenne pepper.” That’s actually quite a few more vegetables than I expected.

Because of the dates, and perhaps because of the tomatoes, this pickle stuff is a brown, sticky sauce that’s horribly sweet — horribly to my mind, anyway, because in the land of pickles, I’m a dyed-true dill girl, and I loathe sweet gherkins or cornichons. I’ve often been offered pickle-and-cheese sandwiches here, and then regretted accepting them, having forgotten that pickle here is not the same as pickle elsewhere. But I digress! The reason I called this post Kohlrabi Pickle is because we eat our kohlrabi…vaguely pickled. Kind of pickled. At its best, it’s crunchy and salty-sweet and tangy, and lovely. And it’s kohlrabi.

I admit that I’ve never eaten kohlrabi cooked. It’s a Brassica member, and just smells too much like broccoli when it’s cooking, which, as you know, smells like something old from the bottom of the trash. Our CSA sent out a recipe for kohlrabi curry in their last vegetable box, which we greeted with the suspicion it deserved. “It’s not actually a root vegetable, no matter what they think,” I thought to myself darkly. “It grows on top of the ground.“

Most of the time when people get kohlrabi in their veggie boxes, they’re a little terrified. Nobody seems to know what to do with it. Wrongly, the Germans consider that stuffing it with pork and seasonings is a good idea. The people who purée it are wrong, as are those who braise, boil, stir-fry, or foil-wrap and grill it. Covering it in cream, sautéeing it with oily fish, frying it into cakes and serving it with chicken, or seasoning it with ginger and cinnamon and baking it for a brunch — no, no, no.

Kohlrabi – ur doin it rong.

The only way to eat kohlrabi is raw.

Observe: Here is how we eat kohlrabi. 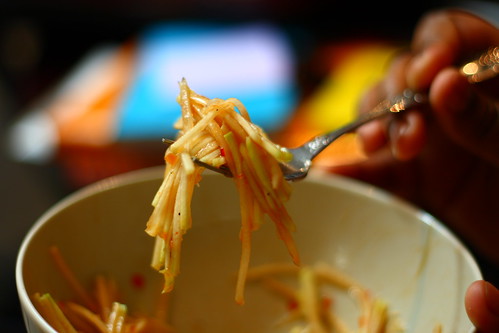 Oh, all right, all right. I concede, in the face of finger-pointing, stomping, whining, raging foodies, that perhaps, and just maybe there are other ways of eating kohlrabi. Maybe in …oh, empanadas. Or something. But mostly, you people are just wrong if you’re not eating it at all. That I won’t take back. You should be eating this.

I used to be one of you. I was frankly scared of kohlrabi, because it looks like the feathered appendages of a molting alien — the purple ones were worse more than the whitish green ones. It smelled weird, the leaves were rubbery looking, and it was too unfamiliar, so my internal nine-year-old said, “Oh, no, no, no,” and that was that.

People! Do not let the nine-year-old run your life! She was wrong about boys, too.

(Well, maybe not all wrong about boys.)

Kohlrabi can be eaten much like som tam, or green papaya salad, without the fish sauce (unless you want that). The spiciness of the chili flakes combined with the sweetness of honey or agave, the saltiness of soy sauce, and the piercing tang of vinegar — makes it simply delish. You can add julienned green beans, chopped cilantro, bean sprouts, match-sticked green onions, a few slices of seeded tomato, a spritz of olive oil and a handful of chopped peanuts, if you’re not in a hurry. If you just want to take your kohlrabi straight, though, while you’ve got your head in a book, you need no other vegetable to make it a very tasty, crunchy, peppery-sweet fresh salad. Your pictures won’t be quite as photogenic that way, but you should be eating it, and not taking stupid pictures anyway (note the half-eaten bowl, there). 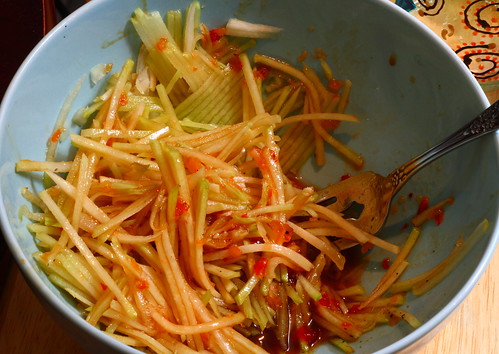 I am startlingly enthusiastic about kohlrabi, and I really think everyone should eat some. Now.

And, okay: if you actually have some recipes that include kohlrabi cooked that you’re absolutely positive a.) don’t smell like the bottom of someone’s intestinal tract and b.) don’t taste yuck, my inner nine-year-old is taking suggestions in the comment section. But she’s only reading them, and probably turning her nose up, and going outside to clomp around in her boots and kick rocks in the alley. (She tends to be grumpy when not reading fantasy novels and stuffing herself with banana bread.)

5 Replies to “A Kohlrabi Pickle”