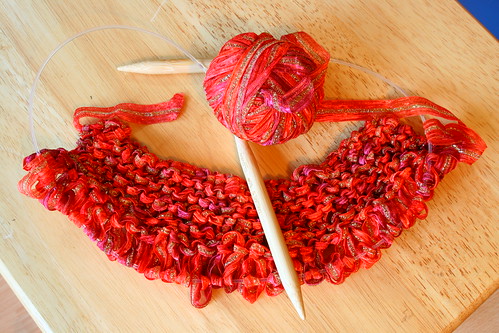 Aargh! Can you believe a scarf I started knitting a year ago (this picture is old, it’s much bigger now) is still unfinished!? My knitting mojo is completely derailed at the moment (of course, being midway through one novel and in revision with the other could possibly have something to do with it. Maybe.), so I’ve been looking around. I think I might have found something to get it back on track.

It all started when I was looking at some dusty old photographs of the Walter Reed Hospital from the early 1900’s. Those recovering from The Great War were brushing up on their knitting and making massive macrame blankets and socks to help keep the rest of the patients warm. It was a really useful occupational therapy, let me tell you, and the knitting machine in the picture looks complicated and amazing. Anyway. Someone suggested that this was “women’s work” — good grief, there’s always one, isn’t there? — and another commenter suggested that we all Google Rosey Grier. And so I did. 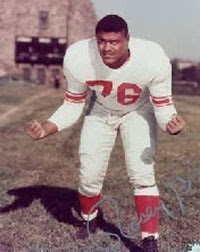 Actually… it’s the right guy. Roosevelt Grier was a NY Giants defensive lineman in the fifties, and retired from the Rams in 1967. He became a bodyguard for the wife of Robert Kennedy afterward, and disarmed the man who assassinated the politician, grabbing his gun and breaking his arm. He was an actor (isn’t every sports star?) for some really bad horror movies. (Does his life not sound like a made-for-TV movie? I mean, seriously.) Now, you know we do baking and knitting here, and the occasional foray into photography and tech rants, so I have to come to the point: aside from being six-foot-six and three hundred pounds, Rosey Grier was really into his needlework. So much so that he wrote a book: Rosey Grier’s Needlepoint for Men.

Now, okay: The seventies have a lot for which to answer, mainly, nineteen million examples of tacky, horrible taste, generally having to do with frightening colors, chaotic patterns, bad hair, and stupid names. Once you check out the slide show, you’ll realize that Rosey was a product of his times. But still — I can’t help but think he is the coolest needlepoint-ing guy ever. Obviously this book is WAY out of print, but don’t you love that director’s chair pattern? Too cute.

This gentleman is now seventy-six, and I hope he’s somewhere still stitching.

Which just goes to prove: if this dude could do it, so can I.

5 Replies to “Rosey Grier is Full of Awesome”