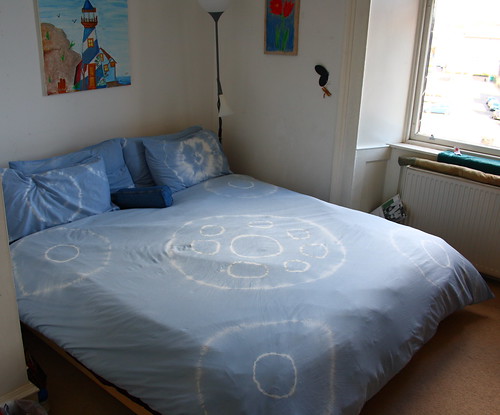 Many girls had trousseaus and maplewood wedding chests, for which they had to cross-stitch horrible samplers and hem endless dishtowels. More modern couples have those heirloom things like banded sets of Limoges dinnerwear, great-grandma’s Oneida silver, and hand-pieced quilts with ring patterns which were pasted down sixteen generations and finally, finally bequeathed to them for their marriage bed … and then there’s us.

We have the ring patterned tie-dye duvet cover.

It just doesn’t seem like summer if you don’t have something dyed and hanging out on the line, which must be a California thing, since we’re the land of sunny skies and nice breezes, and some of us have never gotten over the whole hippie thing. No line here (well, we probably could have found one, but then our wash would have mildewed) but we tossed our newly dyed goods this summer over the bamboo laundry airer, and celebrated having been good friends and more since before one of us could legally drink with our own version of the double ring patterned quilt. Only ours is more than interlocked rings, and it’s just… not exactly like anything you’ll see anywhere else.

The circular pattern is thanks to the fact that one of us has geometry on the brain, and the other of us has a bunch of ponytail holders. Put the two together, and you’ve got the lovely concentric circles of a stone dropped into a pond, the underside of a pool after a dive, or a top view of a very see-through Moon jelly. One cheap duvet cover and four pillowslips + all the rubberbands you can scrounge + one cheap box of dye = tons of fun. 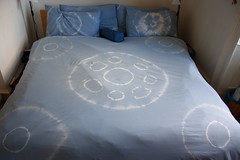 As with all duvet covers, the opening is somehow five inches wide, and the comforters — American sized — didn’t really want to fit, or lie flat. There’s a bit of rumple, a bit of struggle, a fair-sized chunk of individuality fighting formality, structure and classification. Kind of like us. We shoved it in, beat it into submission, then gave up when it mostly looked right. It’ll do. Which is about the best thing you can say about most things.

The Jelly Cover: Aberrant, erratic, and eccentric — and still just might be worth making the bed with fifteen years from now. We should be so lucky about a little project like a relationship, huh?

4 Replies to “Circles of Life and All of That”