Guest one has decamped, guest two is incoming. It is 29C/84F, and right now it is still, but periodically there is a cool breeze, which grows into a wind toward the evening. The forecast has threatened thunderstorms nightly, but other than the odd grumble, and the occasional quick shower, nothing happens to make people do more than take brief shelter with their ice cream. It is truly hilarious how unfussed Europeans, at least, are about getting wet. (The people screeching with umbrellas nearly putting out people’s eyes are …um, some of y’all. We take no responsibility for them.)

We’ve come to that point where we’re losing track of days. Time is kind of a warm blur, punctuated by finding a particularly good coffee (if you’re D) or something close to iced mint tea (cold water, mint leaves, a slice of lemon. Close enough). The joy of being with friends is a lot of random conversations, and books, and occasionally doing things. 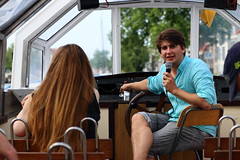 We met the most delightful group of 50-60something Nederlanders on our boat tour the other day. They had grown up in Delft, and all nine siblings (minus the two who were meeting them later) were returning with spouses in tow to honor their parents, both of whom had passed away years ago – on the same day, a year apart. They translated the guide’s words to us, before the guide had a chance to swap languages. They raised a rousing cheer as they passed their old house. They ooh’d and ahh’d that they had a nephew in Cali who was coming to visit next month. They showed us where they’d fallen into the canal, and warned us not to drink the water, ever, despite the fact that it technically is drinkable (Ugh, no thank you; anything accommodating both swans and lily pads seems a bit too natural pour moi). We felt like a long missing part of the family.

It’s been lovely to people-watch here (the image to the left is a link to a video – do click through to experience the square, here in Delft); we spend at least a couple of hours every afternoon or evening just sitting at an outdoor restaurant bar or coffee shop, slowly sipping something cool – or, rather, coolish, as people here don’t really do ice cubes much and iced tea or coffee is just something in a rapidly warming bottle – and just watching the world go by. 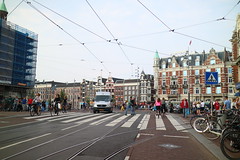 Occasionally one must needs move upwind of a smoker, but people strive to be courteous, because the third space here – the social space that is neither work nor home – is part of what makes The Netherlands work. It is apparently THE most densely populated country in Europe, but it doesn’t feel like it (outside of horrifyingly busy Amsterdam). Even the locals are content to simply BE. 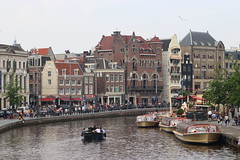 One of the other things we noticed is that there are all kinds of bodies here, and people aren’t trying to hide them. Americans, by virtue of their Puritan fore-bearers, have such a vastly different relationship with their bodies that is kind of calming to see people just… using their bodies and getting on with basic indifference instead of …shame emotions or even much interest. Everyone is out – old, young, middle aged. Beautiful and wrinkled, sagging, slack arms and legs, heron-thin and angular, solidly fat, with rolls and bellies, children pudgy and leggy, clumsy and graceful, people walking, talking, cycling, chasing babies, attempting bad cartwheels and handstands in the square and enjoying. People seem to be simply inhabiting the moment and their bodies and DOING things, and it is …not our American experience, in many ways. 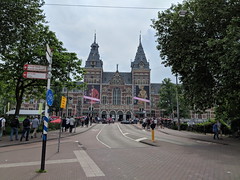 We met a sixteen-year old Dutch girl two years ago in California as an exchange student. She was a sweet kid, but we lost touch. T made an attempt to track her down, and let her know we were here, visiting her country. We offered to meet her somewhere, but she has instead arranged for us to meet her parents, attend church with her, and go out in her father’s boat. It’s a three-hour train ride, so we’re going to spend the night, and that’s our plans for the weekend. 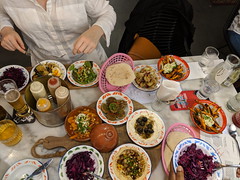 Until then, we have Thing 1 visiting until Thursday, and plans are afoot for a bike ride (if it’s not some ghastly temperature), paddle boats, record shopping, and visiting the best vegetarian restaurant we’ve found, Hummus. (Yes. It has hummus. ALL KINDS. It’s so good.) Until then, we’ve got laundry and shopping to do (but not as much cleaning, as the apartment comes with a cleaner! Vacation perks). Until next time…