It’s funny how easy it is to slip into being “one of the kids” in a big family. After church and lunch with DB’s folks, we all crammed into her Dad’s big van and went on the traditional after-church hike. They drove us out to Megalithic era burial mounds called ‘dolmens,’ or, in Dutch, hunebedden (they’re literally translated as “giant beds,” as the old Dutch word for ‘giant’ is ‘huyne’). These artifacts at Hunebedcentrum are a lot like a shorter Stonehenge, and were dug up/placed between 3400-2850 BC, making them older than the pyramids in Egypt. Probably because no one went haring off to The Netherlands to dig up antiquities (and basically enslave the people), they’ve been largely left alone (there are something like fifty-four of them in the whole country), except by the Germans during WWII – they wanted an airfield, so they dug them up and moved them, displacing the sand and artifacts inside of them… 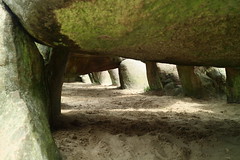 …Aaaand, shortly afterward, the Dutch moved them back.

Anyway. The sign said that archaeologists call the people who built them the Funnel Beaker culture, because they left funnel-shaped beakers and pitchers in the grave below, but obviously you don’t get to see all of that.

It was an interesting trek to the dolmen – through a rather dry type of woods and kind of dune-land outside of a farmland (there were roaming bands of sheep, dogs, and an actual shepherd). 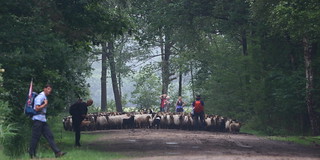 We noticed that the ground underfoot was wet, because it had rained, but it wasn’t horribly sticky, because it was…sandy. And yet again we were reminded that The Netherlands has an awful lot of low-lying land that is near or below sea level. There was a lot of interesting wildlife to see on the trail – aside from the 900 varieties of birds and the gigantinormous mosquitoes and dragonflies, there were a lot of beetles that at first appeared black, but turned out to be a sort of iridescent blue. 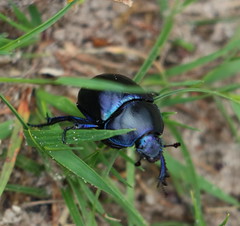 There were numerous tangles of blackberry brambles along the trail, bushes full of what our hosts called “red berries” (red currants) and honeysuckle vines. The trees and bushes were totally different from the types of vegetation we’d gotten used to just a couple of hours away in Delft. And yes, this concludes the Pathfinder/Scout badge portion of this trip… if you end up hiking in another country, you’ll get excited about the flowers/trees/bugs too. (Have we mentioned that this country has storks? Giant, long-legged storks in huge nests up on poles in the middle of the towns… and really long-eared bunnies…? Okay, okay, fine. Enough with the wildlife.) 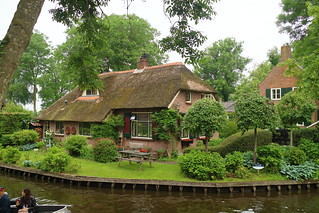 It’s hard to know what to say about Giethoorn. It was settled by a bunch of peat farmers and fisherman. A 10th century flood revealed a great many goat horns (gietehorens) in the area, thus its goat-y name. It’s basically an old settlement in the middle of peat islands, and the only solid land is where the houses are… the rest is all floating reeds, bridges (about 170 of them in a tiny village with less than three thousand people) and …water. So much water. 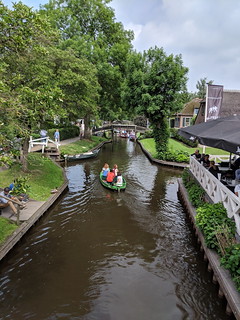 It’s beautiful and quaint, and still. That peat is protected land now and the reeds used to thatch the roofs is also grown in the area, and there’s a certain kind of boat called a Giethoorn punter that is made specifically for that area (punters are poled through the canals by a person standing up and in the back, someone has another pole going in circles as the rudder. Local kids are able to do the whole thing BY THEMSELVES; you can tell the tourists because it takes three people to make the boat move). It’s a cozy and gorgeous place… if you get there early enough. If you don’t, you’re at the mercy of tour boats with loudspeakers, hordes of visiting families who are quite sure they can drive an electric boat (only residents are allowed access to the speed provided by gas engines), badly paddled canoes, hordes of cyclists, people shoving cameras into every open doorway, and residents just trying to get on with their daily lives. Oh, and also, a lot of ducks. 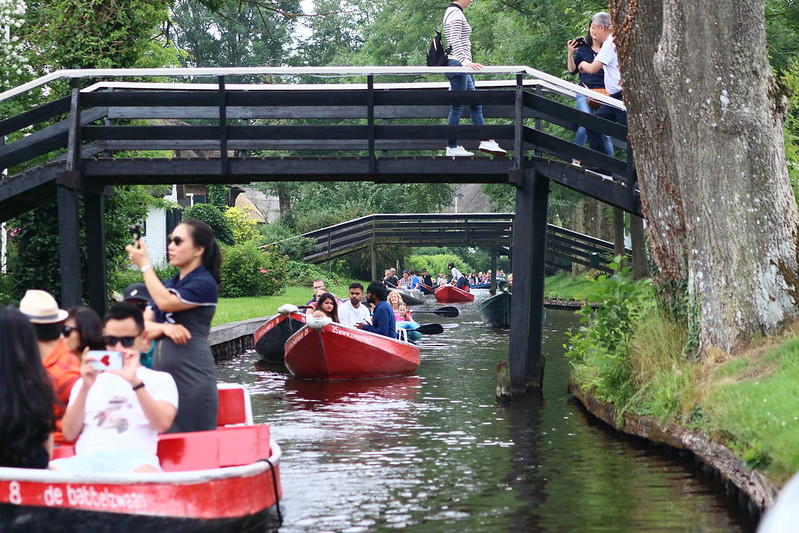 It’s a tiny place, but also huge, in a way. There are something like ninety kilometers – or about fifty-five miles – worth of roads in this small village, and they’re all water roads… so there’s plenty of place to take a boat… and run it into the shore, or up onto the reeds, or tip it over… yeah, you get the idea. It must be such a lovely place to live outside of tourist season… but much of time time, “tourist season” only stops for rain and snow. Fortunately, it rains a lot… we couldn’t imagine living with that level of scrutiny. It was like Disneyland, only the homes of the people were what everyone gawked at constantly. We were lucky, because DB has both worked for a boat tour company and her brother attended primary school in the village, so they know tons of people there, and could skillfully slide us through behind the scenes. 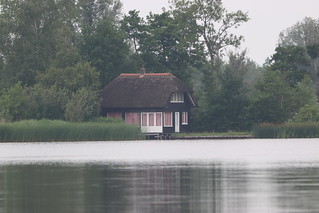 We visited a mineral museum called De Oude Aarth (The Old Earth) and were surprised to find they had small crocodiles (!) and a ton of really great rocks – huge pieces of amethyst and petrified wood sourced from all over the world. There was a museum shop which had many pieces used as furniture – how’d you like a twenty-three thousand Euro table made of a gorgeous slab of petrified wood? Or an end table made up entirely of amethyst? (Someone wanted it; it was marked as sold.) For all the misery of having so many tourists dropping by, clogging up the waterway every weekend, at least businesses seem to be doing well! 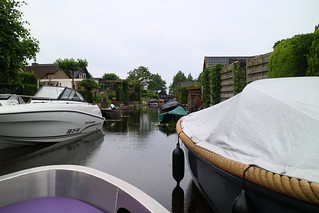 But the most fun thing for us was traveling back to DB’s house, up the quiet canal and pulling up to the back of her house again. Her little brother explained to us that kids in the Netherlands get boat licenses at the age of 12, and are expected to not exceed certain speeds until they’re eighteen and have a full license to move through the waterways. The level of freedom and responsibility is really different – we observed families with a high level of communication between old and young and a lot of respect and compromise on both sides. It was really interesting to compare and contrast it to American families. 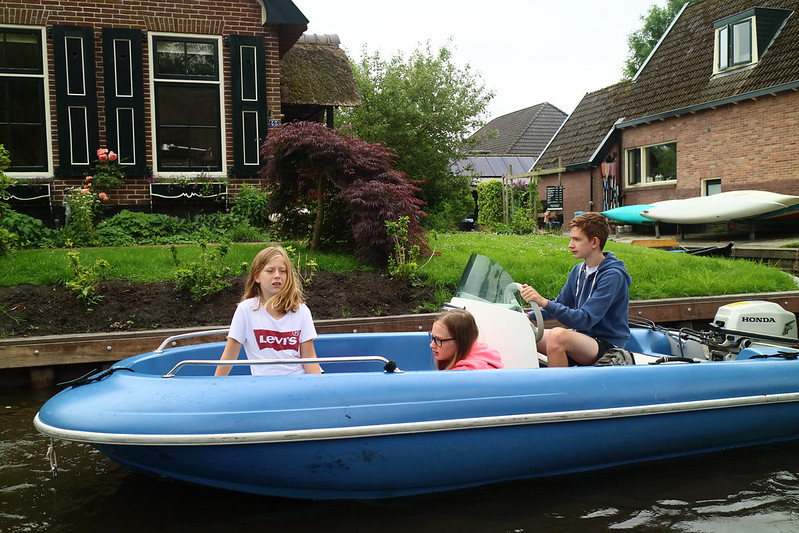 We have a lot of preconceptions about how things are “supposed” to go, how people are “supposed” to act. As Americans, it’s important to remember that we come from a judgmental Puritan past, and that it is where we get a lot of the ideas about society. We have a lot of “shoulds” we tend to put on other people, and it’s not good. This trip has been a reminder about not judging other culture and people, and instead observing and keeping our mouths closed. The quality of life in Europe is one of the most highly regarded in the world… and the people we’ve seen seem happy and content, even though they’re not the richest or the most successful in some ways. We’ve closely observed two host families and done a lot of thinking… and there’s something to be said sometimes for doing things NOT the American way. It’s something to think about.