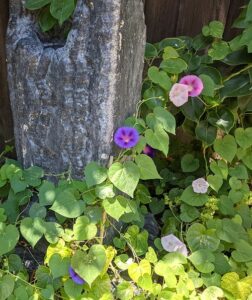 What? Needing to turn in a minimum thousand-word essay and opening the blog program instead instead isn’t normal? But, isn’t that the BEST TIME to blog???

It’s been a minute, hasn’t it?

We had no idea that we had not, in fact, come through the initial impact of the pandemic with no consequences. (We don’t say “survived the pandemic” – it’s not over.) We are, in fact, natural-born Hobbits, and as such, we live like those mythical creatures. Hobbits are happiest at home. We potter around the garden. We fix enormous and impractical meals. We read a great many, many, many books, and do a great many crafts which include glitter, paint, a lot of muttering under our breath, the occasional swear, or a lot of cutting oil. Staying home 24/7? Avoiding people? That’s playing our song.

While one of us is merely introvert adjacent, the other of us is a full-time introvert who requires at least twenty-one business days to recover from any social outing. Pandemic isolation was supposed to be the crowning achievement of an introvert’s life.

(Yeah. That essay. The coding. And the novel that’s due. The technical writing that has to be updated, the PR materials that need to be written. And… And… And…)

It was mostly unnoticeable – and overlapped with T’s autoimmune illness peaking, but the isolation was something which caused both of our brains to atrophy. We realized that we were… too quiet. We usually talk to each other constantly – interrupt each other, exchange ideas with the frenetic energy of sparks on electric wires. Some days we barely exchanged ten sentences between getting up and “pass the salt” at dinner. When we realized that “the worst” was over, and then… it wasn’t, the disappointment was more resignation – we knew this wouldn’t be tidy, but hope is a thing with invasive roots. Now that we know that we need… something to help fix our brains and fill our social wells, we’re in the process of rethinking how we can return to the world in a way that’s safe – considering our weekly outdoor church attendance (more for social interaction than spiritual edification just now) and a socially distanced return to our chamber group, and more activities outdoors, as T’s new meds seem to have pulled her back from brain fog and acute disability. As always, we’re a work in progress… And you? 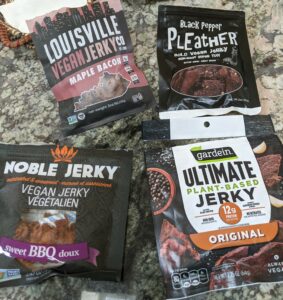 We used to throw tea parties, tasting plate parties and Wine & Cheese (or grape juice and cultured soy milk) parties with the Wees when they were quite small, as a means of introducing them to new foods or just hanging out with the good dishes, and our family in a meaningful way. The last one we had, Elf was eight. Since he’s just turned thirteen this year (!!!!), it’s been a minute. While we aren’t sure whether Elf and Little Man, who are far too cool for our company, would like to come, we’ve been planning a little Taste & See party for a while now. We thought we’d pre-taste one of the offerings, though, just to be on the safe side (and have since decided against having this as part of our taste test). It’s a product we’ve seen everywhere, even a smoked mushroom varietal at our local farmer’s market – vegan jerky.

Having not grown up gnawing on pieces of dried meat at all times, we didn’t at first see the point of this being veganized. But! People who hike and want to pack a quick source of energy swear by these, so we tried four easily available from the supermarket: Pleather in Black Pepper, Louisville Vegan Jerky in Maple Bacon, Gardein in Original, and Noble Jerky in Sweet BBQ.

Our first mistake was buying something called Pleather. Just… no. Both Merriam-Webster and the Oxford Dictionary of Language defines Pleather as a plastic, faux leather substitute, not foodstuff. Our second mistake was getting black-pepper flavored anything: another no. We expected the Louisville to be better, but the maple was sickly sweet, and the bacon flavor was an overdose of liquid smoke. Of the four taste-tested, those two were utterly unspeakable, as in, We Spat Out And Would Not Share With Dogs. The Gardein we thought would be at least okay, because we’ve used Gardein products before, and it was… meh. It’s too moist and has an odd texture. The Noble Jerky is also sweet, but …we immediately wanted to upend the entire bag into a pot of white beans. It’s the exact taste of Boston Baked Beans somehow! Not something you’d want to eat in large amounts without the beans, but …workable. We’re going to cook with both the edible ones and see if they can be redeemed. (We’re not going to try for “elevated,” that’s just asking for the moon.)

So, no winners there, really, but it made us happy to think about doing something as normal as trying weird food and making fun of it.